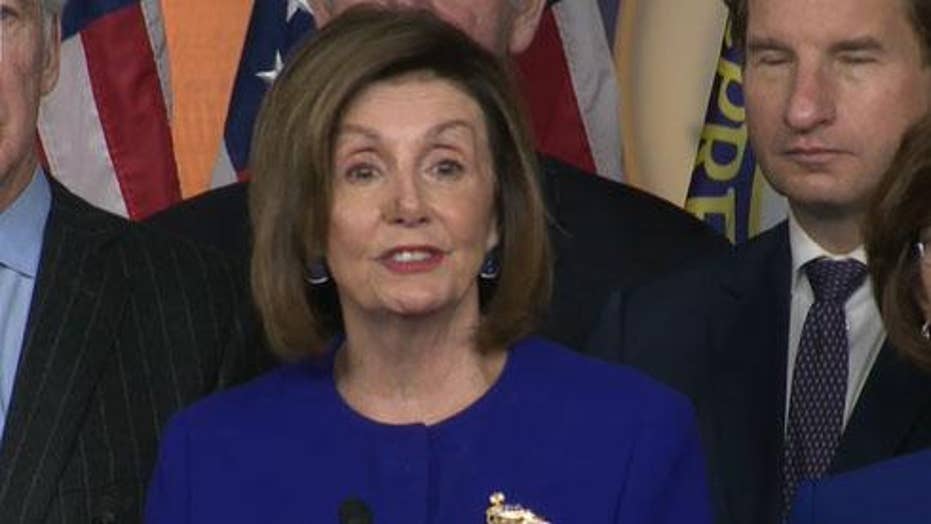 Nancy Pelosi: 'No question' USMCA 'much better than NAFTA'

Senate Majority Leader Mitch McConnell, R-Ky., took fire from House Democrats on Tuesday after saying he will wait until after President Trump's impeachment trial is over before bringing the U.S.-Mexico-Canada Agreement (USMCA) to the Senate floor for a vote.

USMCA would replace the North American Free Trade Agreement (NAFTA), which went into effect in 1994 under former President Bill Clinton. Trump has been an outspoken advocate of the new pact and has publicly pushed for House Democrats to hold a final vote.

McConnell announced his decision shortly after House Democrats said they'd reached an agreement with the White House on how to proceed.

"We will not be doing USMCA in the Senate between now and next week," McConnell said at a Capitol Hill news conference. "That will happen… right after the [impeachment] trial is finished in the Senate."

A spokesman for House Speaker Nancy Pelosi, D-Calif., criticized McConnell's stance and said he has no legitimate reason for delaying the Senate vote, claiming each chamber could approve the measure simultaneously.

“The House and Senate passed Korea, Panama and Colombia trade agreements on the same day. Senator McConnell has no excuse not to bring up the USMCA," the spokesman said.

Fox News reached out to McConnell's office for comment and was told that the Majority Leader does not view his decision as a delay. His office referred Fox News to the rules under the Trade Promotion Authority (TPA), which state that the Senate can take up to 30 days to consider the House bill.

McConnell's office also pointed to a September op-ed co-authored by the majority leader in support of USMCA and said it was ironic for House Democrats to accuse the GOP of delaying the legislation.

"The U.S.-Mexico-Canada Agreement is unambiguously a win for America. It would create new jobs, expand export markets, strengthen protections for workers and generate billions of dollars in new prosperity," McConnell wrote at the time. "The USMCA would also help keep North American partners close while the U.S. hangs tough with China."

Trump addressed the drama during a campaign rally in the swing state of Pennsylvania on Tuesday and claimed Democrats are only supporting USMCA to take the focus off their failed impeachment attempt.

"The silver lining of impeachment and this witch hunt, that's the reason they approved USMCA," he said. “They were very embarrassed by it."

House Democrats are reportedly planning to hold a vote on USMCA sometime next week.