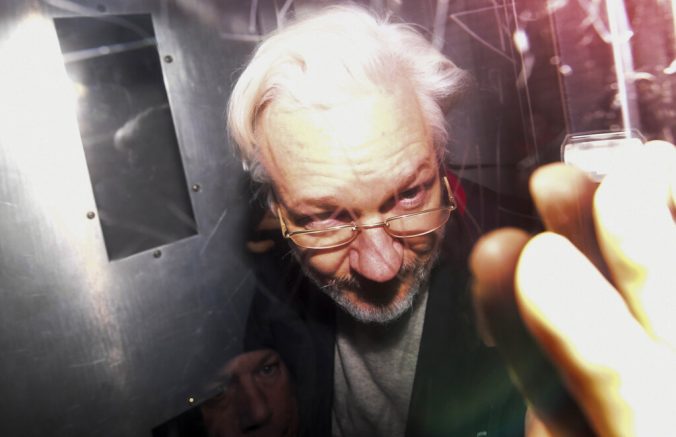 Wikileaks founder Julian Assange leaves in a prison van after appearing at Westminster Magistrates Court, for an administrative hearing in London, Monday, Jan. 13, 2020. Assange made a brief court appearance Monday in his bid to prevent extradition to the United States to face serious espionage charges. (AP Photo/Alberto Pezzali)

A London judge has ruled to have WikiLeaks founder Julian Assange’s extradition trial divided over two days, delaying the second part of the proceedings until May. The hearing Thursday was supposed to determine whether Assange would be extradited to the U.S. from the U.K. on 18 counts, including violating espionage law.

Assange’s legal team and lawyers representing the United States agreed to split the trial, with the first week of the trial to begin February 24th and resume May 18th for the remaining three weeks. 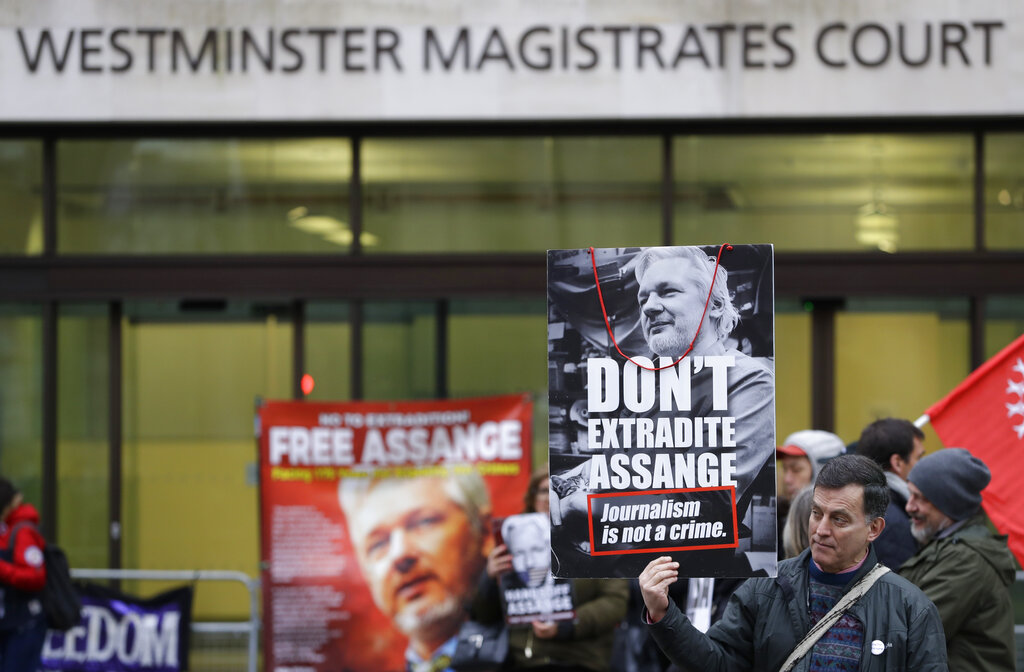 Demonstrators supporting Julian Assange hold banners outside Westminster Magistrates Court in London, Thursday, Jan. 23, 2020. Assange is scheduled to be presented before the court in Westminster by videolink, for a case management hearing ahead of his full extradition trial which begins on Feb. 24. at Woolwich Crown Court. (AP Photo/Kirsty Wigglesworth)

“He is the acid test for the future of free speech in the world. It’s simple, it’s very simple. If he goes, if he disappears, so does free speech. It’s the acid test.” — John McGhee, Assange supporter

If Assange is extradited to the U.S. and convicted, he could spend decades behind bars.

OTHER NEWS: CIA uses technology to disable weapons given to allies to prevent attacks on ‘civilians 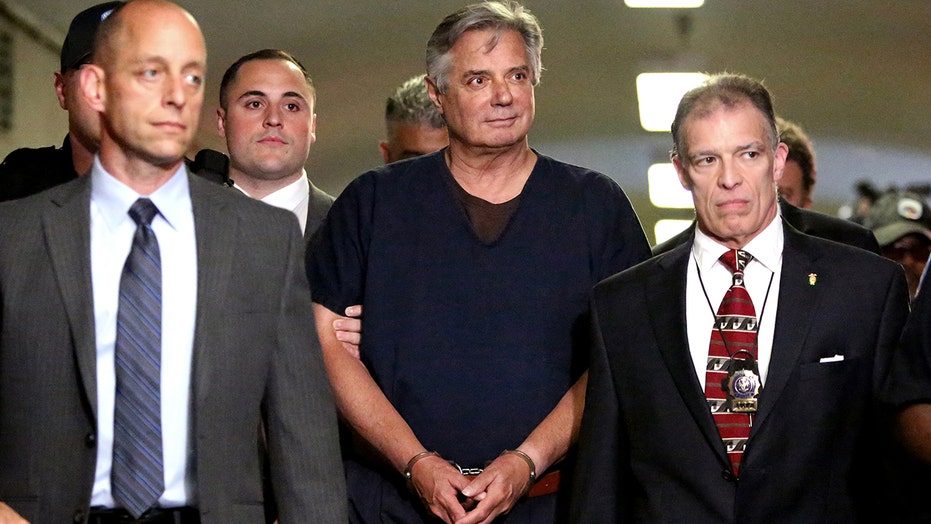 President Trump’s former campaign chairman Paul Manafort has been hospitalized just one day before he was due for a court appearance, his defense attorney told Fox News.

Manafort, who is serving more than seven years in prison after being convicted in Special Counsel Robert Mueller’s investigation for tax fraud and conspiracy in March, has been recovering in a Pennsylvania hospital under the watch of corrections officers.

Manafort’s defense attorney Todd Blanche told Fox News his condition is stable but Manafort will not be present at the hearing tomorrow.

“Of course, his family and friends are extremely concerned about his health and still do not have a full understanding of his medical condition or well-being,” said Blanche.

Though Blanche could not confirm, ABC News, who first reported the hospitalization, said it had received word from two sources familiar with the situation that Manafort was hospitalized due to a cardiac event.

Manafort was due in court in New York City to face charges of residential mortgage fraud, conspiracy, falsifying business records, among others. The state charges in New York came just after his March sentencing and could put him outside the president’s power to pardon.

The New York hearing on Manafort’s case is expected to go on as scheduled, without Manafort in the courtroom, according to The Associated Press. A judge is expected to rule on a defense motion which sought to have the case dismissed on the grounds of double jeopardy.

Manafort in October 2018 appeared in court in a wheelchair for a hearing to set his sentencing date. Attorneys for Manafort argued the sentencing date should be set for as soon as possible because the terms of Manafort’s current imprisonment were negatively affecting his health.

Under his current conviction Manafort is scheduled to be released Christmas Day 2024. 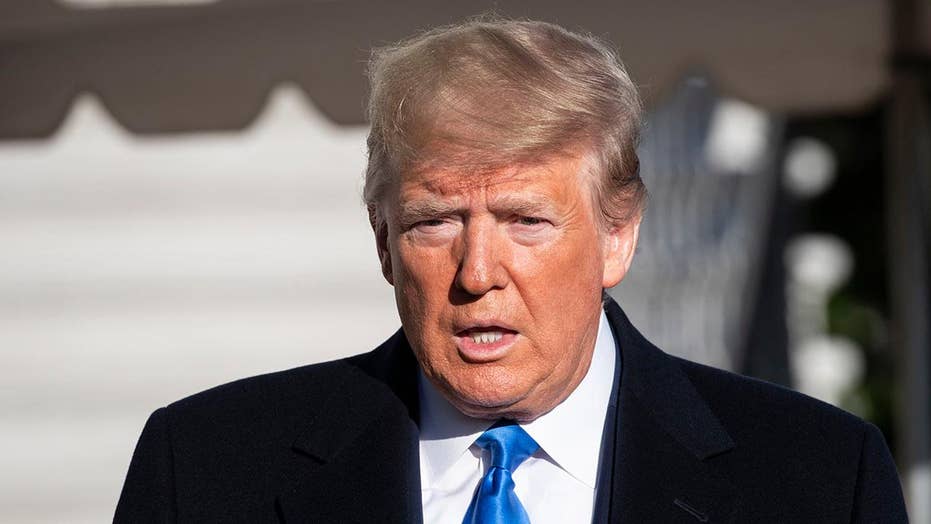 'Legitimate basis' for Trump to have concern about Hunter Biden's role on Burisma board, GOP counsel says

The top lawyer for Judiciary and Intelligence Committee Republicans testified Monday that there was a “legitimate basis” for President Trump to ask Ukrainian leader Volodymyr Zelensky to launch a public investigation into the Biden family’s dealings in Ukraine.

During impeachment inquiry testimony in front of the Judiciary Committee, minority counsel Steve Castor tried to turn the tables on the Democrat-led investigation into whether President Trump tried to pressure his Ukrainian colleague into investigating a political rival by withholding aid and a White House meeting by arguing that there were real concerns about the former vice president’s son’s involvement with the Ukrainian natural gas company, Burisma Holdings.

“Hunter Biden was reportedly receiving $50,000 to $83,000 a month for compensation for his role on the Burisma board,” Castor said of the former vice president’s son.

Castor questioned why a person who doesn’t have a history with Ukraine and doesn’t speak either Ukrainian or Russian would have a senior role on the company’s board.

“At the time that Hunter Biden joined Burisma’s board, his father, former Vice President Biden, was the Obama Administration’s point person for Ukraine.”

Castor speculated that the only reason Hunter Biden was on the Burisma board was because his father was the vice president at the time, and leading the Obama administration’s efforts in Ukraine.

“Hunter Biden was not qualified to serve on the board,” Castro said. “There is a legitimate basis for President Trump to have a concern about Hunter Biden’s role on the Burisma board.”

The impeachment inquiry into Trump began when a whistleblower reported that the president had pushed Zelensky to launch a public investigation into the Biden family’s dealings in Ukraine—specifically, why Joe Biden pressured former Ukrainian President Petro Poroshenko to fire a top prosecutor, Viktor Shokin, who at the time was investigating Burisma Holdings.

Though the timing raised concerns among anti-corruption advocates in Ukraine and by a number of high-level U.S. foreign service members, there has been no evidence the former vice president or his son broke the law.

The House Judiciary Committee is holding an impeachment hearing Monday where committee lawyers are presenting evidence in the case, as Democrats begin to draft articles of impeachment against President Trump at the direction of House Speaker Nancy Pelosi. 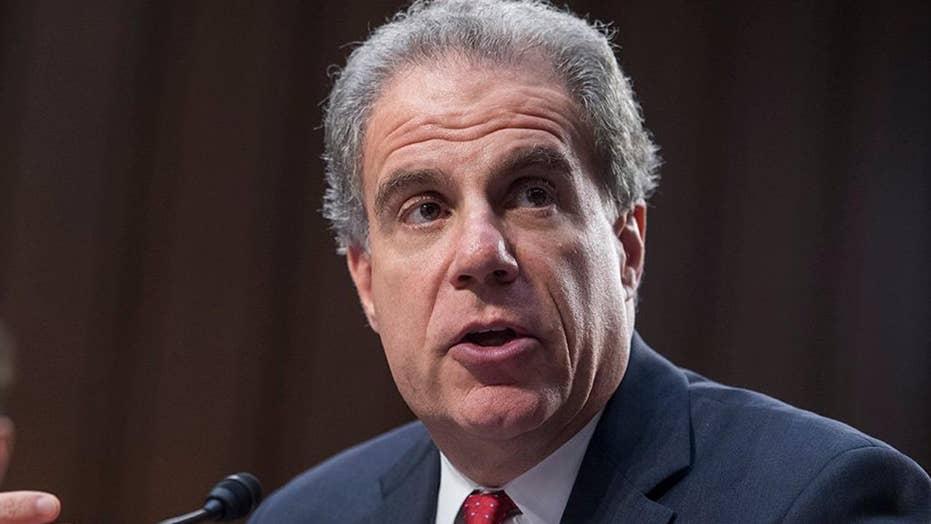 The IG report on the origins of the Russia probe will reportedly hit FBI leadership for their handling of the investigation, according to The New York Times.

The Justice Department's internal watchdog is set to release a highly anticipated report Monday that is expected to document misconduct — including the deliberate falsification of at least one key document — during the investigation into President Trump's 2016 campaign.

At the same time, the report, as described by people familiar with its findings, is expected to conclude there was an adequate basis for opening one of the most politically sensitive investigations in FBI history. It began in secret during Trump’s 2016 presidential run before then-Special Counsel Robert Mueller ultimately took it over.

The report comes as Trump faces an impeachment inquiry in Congress centered on his efforts to press Ukraine to investigate a political rival, Democrat Joe Biden — a probe the president also claimed has been politically biased. The House Judiciary Committee is expected hold a hearing Monday on the inquiry's findings.

The release of Inspector General Michael E. Horowitz's review is unlikely to quell the partisan battles that have surrounded the Russia investigation for years. It's also not the last word: A separate internal investigation continues, overseen by Attorney General Bill Barr and led by U.S. Attorney John Durham. That investigation is criminal in nature, and Republicans may look to it to uncover wrongdoing that the inspector general wasn’t examining.

Sources told Fox News in October that Durham's probe into potential FBI and Justice Department misconduct in the run-up to the 2016 election through the spring of 2017 has transitioned into a full-fledged criminal investigation — and Horowitz's report will shed light on why Durham has been leading a criminal inquiry.

Horowitz has forwarded to Durham evidence that an FBI lawyer manipulated a key investigative document related to the FBI's secretive surveillance of former Trump adviser Carter Page in 2016 and 2017 — enough to change the substantive meaning of the document, according to multiple reports last month.

"I think we'll learn part of the story tomorrow," Page told the Fox Business Network's Maria Bartiromo on "Sunday Morning Futures." "What I've learned from some of the leakers and one of the papers of record: a top reporter there said there's a lot of exculpatory evidence that's remaining classified, and there's been internal battles."

It is unclear how Barr, a strong defender of Trump, will respond to Horowitz's findings. He has told Congress that he believed "spying" on the Trump campaign did occur and has raised public questions about whether the counterintelligence investigation was done correctly.

The inspector general's investigation began in early 2018, and has focused in part on the FBI's surveillance of Page. The FBI applied in the fall of 2016 for a warrant from the secretive Foreign Intelligence Surveillance Court to monitor Page's communications, flatly telling the court that Page was an "agent" of a foreign power.

Page was never charged and has denied any wrongdoing. The ultimately successful warrant application on Page relied in part on information from British ex-spy Christopher Steele – whose anti-Trump views have been well-documented – and cited Page's suspected Russia ties.

In its warrant application, the FBI inaccurately assured the Foreign Intelligence Surveillance Act (FISA) court on numerous occasions that media sources independently corroborated Steele's claims, and did not clearly state that Steele worked for a firm hired by Hillary Clinton's campaign and the Democratic National Committee (DNC).

Much of the Steele dossier has been proven discredited or unsubstantiated, including the dossier's claims that the Trump campaign was paying hackers in the United States out of a nonexistent Russian consulate in Miami, and that former Trump attorney Michael Cohen traveled to Prague to conspire with Russians. Mueller also was unable to substantiate the dossier's claims that Page had received a large payment relating to the sale of a share of Rosneft, a Russian oil giant, or that a lurid blackmail tape involving the president existed.

Sen. Lindsey Graham, the chairman of the Senate Judiciary Committee, which is scheduled to hear testimony from Horowitz on Wednesday, said he expected the report would be "damning" about the process of obtaining the warrant.

"I'm looking for evidence of whether or not they manipulated the facts to get the warrant," Graham, R-S.C., told "Sunday Morning Futures."