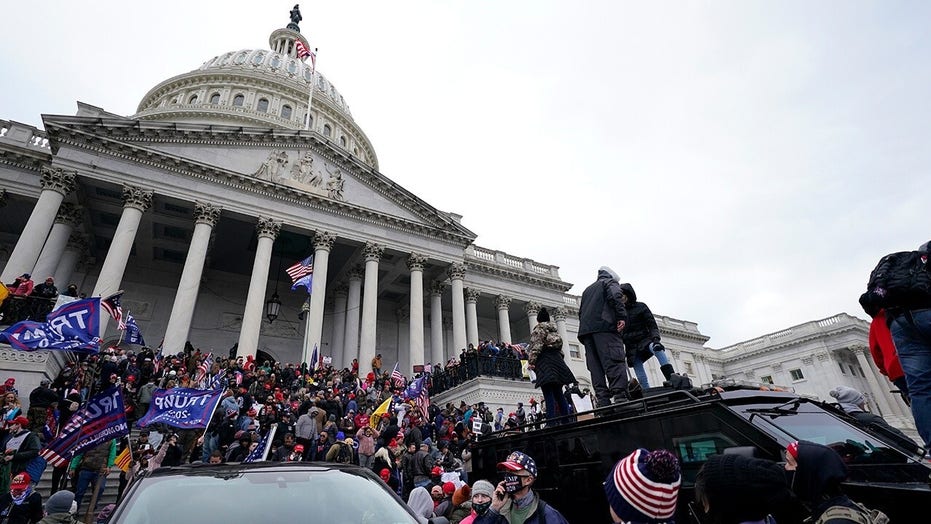 Demonstration by president's supporters leads to storming of Capitol building; John Roberts has the latest.

**Want FOX News Halftime Report in your inbox every day? Sign up here.**
A TIPPING POINT, BUT IN WHICH DIRECTION?
Walking out into the midwinter twilight on Capitol Hill, you could see the realization in the faces of the members of the mob as it melted away from the Capitol.
A hard, cold wind raking their reddened eyes, they seemed to be slowly grasping the enormity of their offenses – the historic nature and consequences of their betrayal of the republic sinking in.
And while it was impossible not to feel some anger toward the perpetrators of what will be to our lasting national shame, it was also impossible not to feel pity for them.
If you believed the absurd lies and elisions being offered at both ends of the National Mall today – that sinister forces controlled by shadowy foreign powers had already robbed us of our democratic franchise, that the members of Congress were stealing the presidency – then what they did would be entirely appropriate.
For the duped, this was righteous anger rightfully expressed.
Like the rioters in the wake of incidents of police brutality against African American suspects, their violence was an expression of their rage, but also the logical response to the untruths they had been told over and over again. If people in positions of influence tell you that the whole system is hopelessly corrupt and that its leaders are intentionally harming you, why wouldn’t you revolt?
This is not to say that either these goons or those goons are not responsible for their own crimes. We do not mean to infantilize them. But we do mean to point out that the ones who exploit their fear and ignorance bear a considerable part of the blame.
Today was, pray God, the low-water mark for a deeply sick Republican Party. Whatever your own politics, the psychosis inside the GOP has become a national crisis. And to think we assumed that losing control of the Senate would be the worst thing that happened to Republicans today.
President Trump has spent months exploiting folks like these. He has hoovered up their contributions given in tribute to the risible deception that somehow he would prevail and remain in power. After listening to enough of his rants, we can’t say for sure that he hasn’t convinced himself that somehow he did win. But what he has surely known for weeks is that his case was hopeless.
Summoning this mob to Washington depended on his promise that it could somehow make a difference. He even threw his own vice president to the wolves with the lie that somehow Mike Pence could declare Trump the winner over President-elect Joe Biden.
Trump is such a dedicated political arsonist that he couldn’t even call for the rioters to disperse without repeating the incitements that brought his party to this pitiful pass. No shame can touch him.
But this is Trump’s way. He takes no responsibility for his actions as a rule. He has next to no knowledge of American history or civics. He is an enthusiastic ignoramus when it comes to the way our government works. He goes with his gut. And no matter what – even as his supporters injured police officers and a woman lay dying – he always claims to be the victim.
The sadder souls are the folks who know better. Smart, educated men like Steve Scalise and Ted Cruz served up in the Capitol before the riot today what Sen. Daniel Patrick Moynihan once "boob bait for bubbas" in describing Bill Clinton’s pandering in the 1990s.
They said they understood why the mob making its way down the Mall was angry – and rightfully so. They said Congress had better listen to the claims of the president, no matter how unconstitutional or imbecilic, because the mob was angry.
Mitch McConnell stood up today and denounced the depredations to which Trump and his allies were subjecting the nation. He did it at risk to his standing and with the knowledge that he would face the rage of many in his own party. Little did he know.
In their sophistry, some educated and experienced Republicans pretended that somehow the results of the presidential election might be reversed. But they made sure to do it with a wink to the elites that they understood the whole thing was a scam. They staged symbolic protests to appease the mob, yes, but also to shove their colleagues in front of it.
Again, it’s not to say that Trump or his abettors like Scalise and Cruz are responsible for the actions of the thugs who raided the Capitol today. These were adults with free will and the gift of reason.
But it is to say that the right-wing populists are part of a terribly sick political party that has become addicted to grievance, anger and paranoia.
What America and the world will now wait to see is whether Republicans can heal themselves. This will be a defining moment for the party that can claim the noble heritage of being born to stamp out slavery and preserve the Union.
Can today’s Republicans be worthy of their heritage? Can they do better than denounce violence and also denounce pandering, dishonesty and the politics of incitement? The closing days of Trump’s presidency will tell the tale.
At this writing, we wait for Congress to resume the work of dealing with the procedural protests of lawmakers who this morning came to the Capitol to leverage the anger of the mob outside to their own political advantage.
How will they behave now that the mob has been inside?
Chris Stirewalt is the politics editor for Fox News. Brianna McClelland contributed to this report. Want FOX News Halftime Report in your inbox every day? Sign uphere.