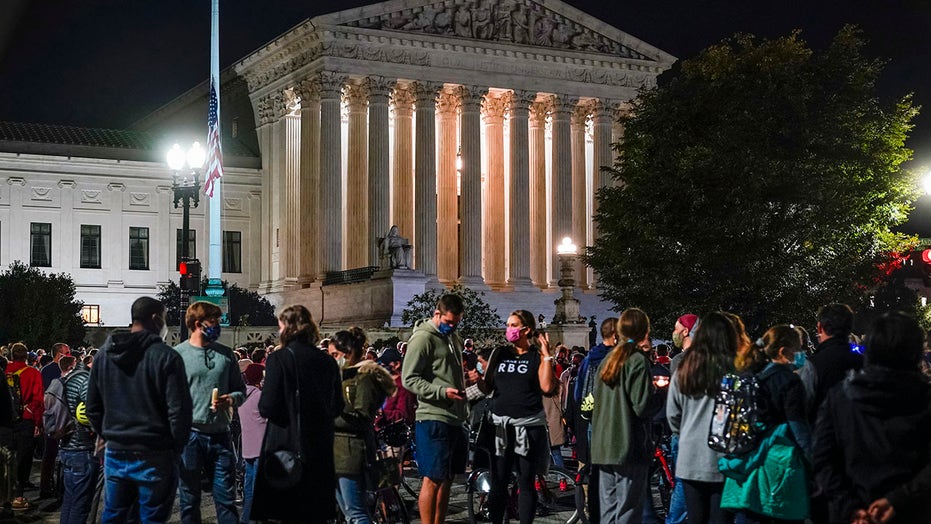 Joe Biden on Sunday made a personal appeal to the handful of Senate Republicans who will determine if President Trump’s pending Supreme Court nominee will go forward, while framing the titanic battle over the high court opening as a referendum on saving health care coverage for tens of millions of Americans amid the worst pandemic in over a century.

The former vice president – speaking at the National Constitution Center in Philadelphia on Sunday in his first address since Friday night’s passing of Supreme Court Justice Ruth Bader Ginsburg – warned that if the president and Senate Majority Leader Mitch McConnell, R-Ky., go ahead with their push to confirm a successor to Ginsburg with less than 7 weeks to go until the Nov. 3 election, “it would cause irreversible damage.”

And he called the move by the president and the Senate Majority Leader an “exercise in raw political power.”

Pointing to McConnell’s refusal to hold a hearing for President Obama’s nominee four years ago, after Supreme Court Justice Antonin Scalia died just nine months before the last presidential election, Biden argued that “having made this their standard when it served their interest, they cannot, just four years later, change course when it doesn’t serve their ends.”

Biden also pushed back on repeated calls by the president, the Trump campaign, and allies, to release a list of his own potential nominees. Breaking with precedent, then-GOP presidential candidate Trump in 2016 released a list of conservative potential high court nominees. Earlier this month, the president added another 20 names to his list.

“It’s a game to them, a play to gin up emotions and anger,” Biden said. “There’s a reason why no presidential candidate other than Donald Trump has ever done such a thing.”

The Trump campaign quickly fired back on Twitter, saying "Joe Biden is expecting people to vote for him without knowing who he’ll put on the Supreme Court. That should scare every single American."

Republicans currently hold a 53-47 majority in the Senate. McConnell needs a simple majority to confirm the president's high court nominee.

Two moderate Republicans – Sens. Susan Collins of Maine and Lisa Murkowski of Alaska – said this weekend that the nomition to succeed Ginsburg should not be taken up until after the election, when the next president and control of the Senate will be determined by voters.

McConnell can only afford to lose the support of one more Republican and still be able to push through Trump's nominee.

Biden, in his speech, pleaded with "those few Senate Republicans — the handful who will really decide what happens. Don’t vote to confirm anyone nominated under the circumstances President Trump and Senator McConnell have created. Don’t go there."
"Uphold your Constitutional duty — your conscience," he said. "Cool the flames that have been engulfing our country."

Biden stated that "if Donald Trump wins the election — then the Senate should move on his selection — and weigh that nominee fairly."
But he stressed that "if I win the election, President Trump’s nomination should be withdrawn. As the new President, I should be the one who nominates Justice Ginsburg’s successor, a nominee who should get a fair hearing in the Senate before a confirmation vote."