Among the litany of challenges that will confront President-elect Joe Biden when he assumes office Wednesday — including the coronavirus pandemic, emboldened enemies like Iran, and confirming critical nominees amid a Trump impeachment trial — will be handling a large migrant caravan currently making its way to America's southern border.

Friday, two groups of more than 3,000 Honduran migrants each pushed their way into Guatemala without registering as part of a larger caravan headed to the United States, the Associated Press reported. A third group entered Guatemala on Saturday. The migrants aim to reach Mexico, which is north of Guatemala, and eventually make their way to the United States border.

The organization Pueblos Sin Fronteras called on the U.S., Mexico and Central-American governments to allow the caravan to travel freely and seek asylum in the U.S. It asked the incoming Biden administration to "honor its commitments." 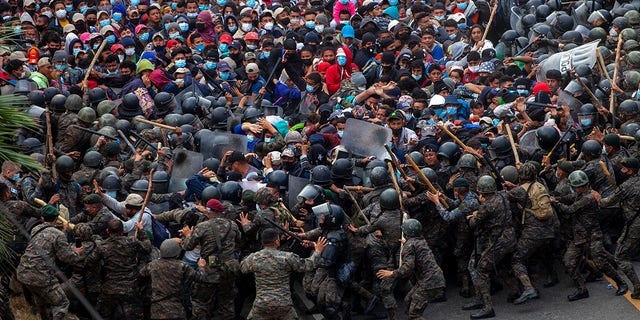 Honduran migrants clash with Guatemalan soldiers in Vado Hondo, Guatemala, Sunday, Jan. 17, 2021. Guatemalan authorities estimated that as many as 9,000 Honduran migrants crossed into Guatemala as part of an effort to form a new caravan to reach the U.S. border. (AP Photo/Sandra Sebastian) (AP)

BIDEN TRANSITION OFFICIAL TELLS MIGRANT CARAVANS: 'NOW IS NOT THE TIME' TO CIME TO US

"We recognize the importance of the incoming Government of the United States having shown a strong commitment to migrants and asylum seekers, which presents an opportunity for the governments of Mexico and Central America to develop policies and a migration management that respect and promote the human rights of the population in mobility," the group said. "We will advocate that the Biden government honors its commitments."

Biden has promised to reverse many of the Trump administration's immigration policies. These include a rule that requires migrants to stay in Mexico as they await hearings, called the Migrant Protection Protocols (MPP). Critics say the MPP puts migrants at risk.

But those changes will take time. 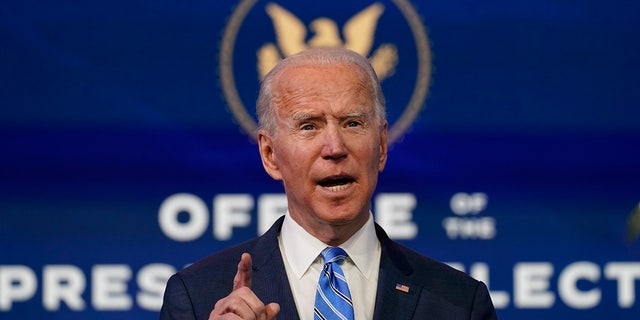 Domingo Garcia, former president of the League of Latin American Citizens, said Biden warned activists Thursday that the Trump impeachment trial in the Senate may delay immigration changes within Biden's first 100 days, according to the Associated Press. A senior Bident transition official, meanwhile, told NBC News that asylum seekers will not be able to immediately enter the U.S. and that "the situation at the border isn't going to be transformed overnight."

Biden said during the presidential campaign that he would at least ask Congress to grant amnesty within his first 100 days.

"I’ve made it very clear, within 100 days, I’m going to send to the United States Congress a pathway to citizenship for over 11 million undocumented people," Biden said in the second presidential debate. "And all those so-called Dreamers, those DACA kids, they’re going to be immediately certified again, to be able to stay in this country, and put on a path to citizenship."

Meanwhile, Republicans are blaming Biden's campaign promises for an expected influx of migrants.

Cotton added Monday: "He’s unveiling his draft immigration bill this week, and it’s what you’d expect from the party of open borders: Total amnesty, no regard for the health or security of Americans, and zero enforcement."

Former Republican House Speaker Newt Gingrich warned waves of migrants coming to the U.S. could only get larger.

The Biden transition team did not respond to questions from Fox News about whether they think Biden's campaign rhetoric caused the caravan and whether Biden plans to allow those in the caravan into the U.S.

It also didn't say whether those entering the U.S. from the caravan will be subject to the same coronavirus protocols as air travelers, who currently are required to have a coronavirus test to enter the U.S. Video shows tightly-packed caravan crowds with few wearing masks.