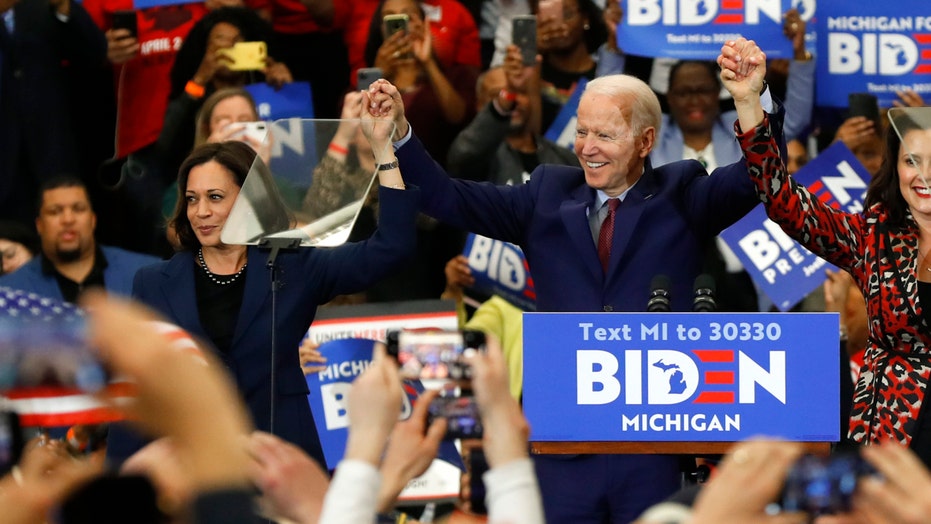 Joe Biden and Kamala Harris are making their debut together as running mates Wednesday afternoon in Wilmington, Del., a day after Biden announced his choice of the California senator to join him on the 2020 Democratic ticket.

Biden and Harris will work together to discuss “working together to restore the soul of the nation and fight for working families to move the country forward,” according to the Biden campaign.

Later, they will participate in a virtual “grassroots fundraiser meet and greet."

KAMALA HARRIS CHOSEN AS BIDEN'S RUNNING MATE: WHAT TO KNOW

Biden and Harris will formally accept their nomination at the virtual Democratic National Convention next week.

Ahead of the event, the Trump campaign slammed the ticket, arguing Harris "pushes Biden even farther to the left than he had already moved."

Shortly before the Biden-Harris debut, President Trump held an event Wednesday afternoon focused on "Getting America's Children Safely Back to School."

Biden announced Tuesday afternoon that he would be picking Harris, the daughter of Indian and Jamaican parents, to be his running mate.

Biden referenced Harris' history with his late son, the former Delaware Attorney General Beau Biden, when he tweeted Tuesday, "Back when Kamala was Attorney General, she worked closely with Beau. I watched as they took on the big banks, lifted up working people, and protected women and kids from abuse. I was proud then, and I'm proud now to have her as my partner in this campaign."

The decision to tap Harris, following months of secret meetings and closely held deliberations, indicates the former vice president is setting aside their friction from the primary campaign. Harris memorably drew sharp contrasts with Biden when she challenged him on the debate stage over his past resistance to federally mandated desegregation busing.

Harris has served as senator from California since 2017. Before that, she worked as California’s attorney general from 2011 to 2017 and San Francisco’s district attorney from 2004 to 2011.

"I'm honored to join him as our party's nominee for Vice President, and do what it takes to make him our Commander-in-Chief," Harris tweeted in response to Biden’s announcement Tuesday.