With an eye toward reuniting the country after the turbulent presidency of Donald Trump, President-elect Joe Biden marked the Martin Luther King Jr. federal holiday by volunteering.

The president-elect and his wife, the incoming first lady Jill Biden, made a short trip Monday from their home in Wilmington, Del., to Philadelphia, to volunteer at Philabundance, a hunger-relief organization, during the official day of service to celebrate the historic civil rights leader’s life and legacy.

HARRIS RESIGNS FROM THE SENATE TWO DAYS BEFORE INAUGURATION

"Service is a fitting way to start to heal, unite, and rebuild this country we love," Biden wrote on Twitter.

The Democratic president-elect's calls to work across the aisle with Republicans to try and unify a bitterly divided country has been a major theme of Biden's presidential campaign and transition for the past two months.

LIVE UPDATES FROM FOX NEWS ON THE BIDEN INAUGURATION

The Bidens' trip to Philadelphia comes two days before the president-elect is inaugurated. The Bidens, along with their daughter Ashley Biden and granddaughter Finnegan Biden, helped load cans into packed boxes that were being moved along a conveyor belt set up outside the building in the parking lot. Fox News was told that the Bidens packed over 150 boxes. 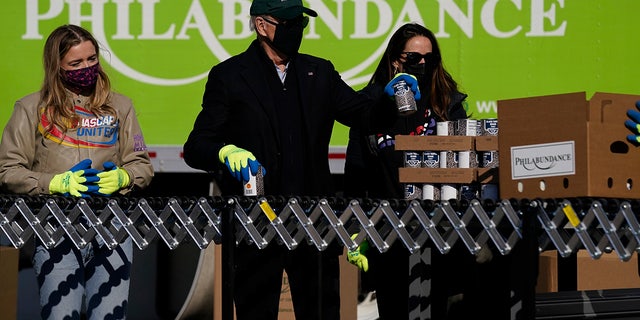 The president-elect wore a dark coat and a ball cap, which appeared to be a green Philabundance hat.

Philabundance provides more than 24 million pounds of food each year to those in need, including by providing food to smaller community food banks.

Vice President-elect Kamala Harris and her husband, incoming second gentleman Doug Emhoff, marked the holiday by volunteering in the nation’s capital at Martha’s Table, a non-profit organization that works to increase access to healthy food and high-quality educations.