As the Trump administration heads into its final week, White House social media director Dan Scavino told administration officials Thursday to hold their "heads high" and be "proud of their accomplishments."

"I encourage all Trump Administration Officials to hold your heads up high, and be proud of what you have accomplished together, over the past four years, for the American People," Scavino, a longtime aide to the president, wrote on Facebook.

"While cancel culture kicks into high gear, and blacklisting of our names for future employment is underway, stay strong, and we will all prevail!"

He shared a message he said he received from an unnamed Republican senator who said: "I appreciate your service over four long, tough years. Hold your head high for what you accomplished during a very consequential time." 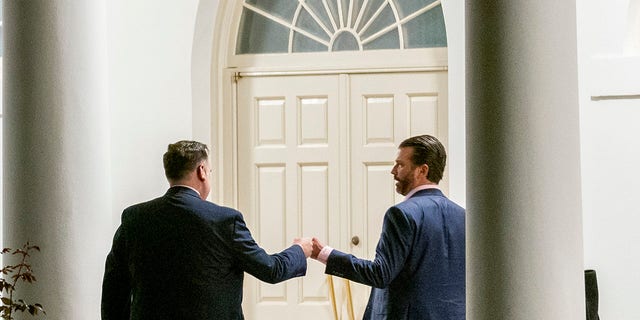 White House social media director Dan Scavino, left, greets Donald Trump Jr., the son of President Donald Trump, after taking a photo of him along the Colonnade toward the West Wing in the early morning hours at the White House in Washington. (AP Photo/Andrew Harnik)

Several administration officials have resigned in the wake of the deadly siege of the U.S. Capitol and others have faced condemnation and accusations over the rhetoric that allegedly led to the riot.

President Trump and close aides like Rudy Giuliani also lost their Twitter accounts after the attack. The company said their accounts were taken down over "risk of further incitement of violence."

Twitter's decision has angered many conservatives.

"The radical left’s cancel culture is about silencing you," former White House press secretary Sarah Huckabee Sanders tweeted Sunday. "For all their empty rhetoric about 'tolerance' and 'free speech,' the left and their big tech allies only tolerate speech they agree with and repress dissent."

In a recent op-ed, Forbes writer Randall Lane urged businesses against hiring Trump administration veterans like Kayleigh McEnany and Kellyanne Conway because it would hurt the company’s credibility.

Lane argued employers need to "create repercussions for those who don’t follow the civic norms" so the country can "return to a standard of truth."

"Don’t let the chronic liars cash in on their dishonesty," he wrote," adding, "Let it be known to the business world: Hire any of Trump’s fellow fabulists…and Forbes will assume that everything your company or firm talks about is a lie."

He claimed the op-ed wasn’t cancel culture because former Trump staffers would always be able to find work in conservative-friendly circles.