Impeaching Trump after he leaves office would be ‘plainly unconstitutional’: Alan Dershowitz

After impeaching President Trump just days before he is set to leave office, House Democrats will not commit to a timeline for delivering the article of impeachment to the Senate so that a trial can begin.

"The Senate has not been in session so the speaker is organizing the formal transfer of the articles and it should be coming up soon. I know the speaker also considers the president a clear and present danger to the republic," Rep. Jamie Raskin, D-Md., who will act as the Democrats' lead impeachment manager, said Sunday on CNN's "State of the Union."

PRESSURE ON PELOSI TO SEND TRUMP IMPEACHMENT TO SENATE AS SCHUMER, MCCONNELL, TRADE BARBS OVER NEXT STEPS

But when pressed for a more specific timeline, he said he didn't know.

"I haven’t spoken to [House Speaker Nancy Pelosi] today about this. Look, I know that everybody wants to focus on trial tactics and strategy and so on. I want people to focus on the solemnity and the gravity of these events," Raskin said. 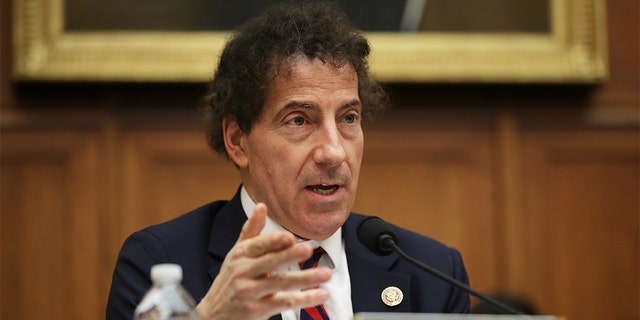 Currently, the Senate is scheduled to reconvene on Jan. 19. The Senate could receive the message from the House that it has impeached the president then, the day before President-elect Joe Biden takes office. If Pelosi, D-Calif., has transmitted the article by that time, the Senate would be forced to begin its trial of the president at 1 p.m. on either Jan. 20 or 21.

Jan. 20 is a key date, not only because of the inauguration, but because Senate Democrats will have control of the chamber with the help of Vice President-elect Kamala Harris' tiebreaking vote.

TRUMP IMPEACHMENT SUPPORTED BY ONLY 8% OF REPUBLICANS: POLL

"I don't think anybody would seriously argue that we should establish a precedent where every president on the way out the door has two weeks or three weeks or four weeks to try to incite an armed insurrection against the union," Raskin said on Sunday. "This was the most serious presidential crime in the history of the United States of America." 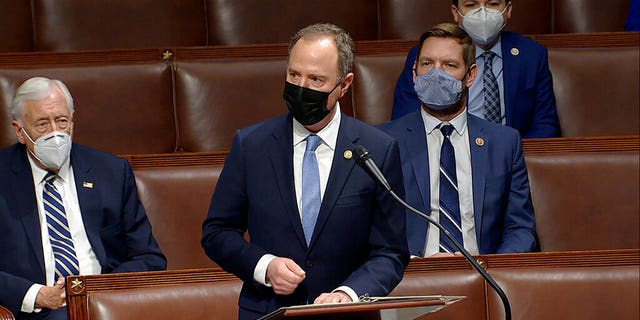 In this image from video, Rep. Adam Schiff, D-Calif., speaks as the House debates the objection to confirm the Electoral College vote from Pennsylvania, at the U.S. Capitol early Thursday, Jan. 7, 2021. (House Television via AP)

"This is obviously the most serious crime against our country and Constitution of any president in history, and the fact that it took place in the last month doesn't make it less serious," Schiff said.

Schiff, a cheerleader for both of Trump's impeachments, said he did not know when the articles would be delivered so that the Senate trial can begin.

"That will be the speaker's decision, I will leave the strategy to her and to Jamie Raskin and that incredibly talented team," Schiff said.

But Pelosi hasn't committed to a timeline, although her chief deputy, House Majority Leader Steny Hoyer, D-Md., said the article should be sent "as soon as possible."

This is a familiar course of action for Pelosi, who held on to the two articles of impeachment passed against Trump in late 2019 for weeks before eventually transmitting them to the Senate. She did this, she explained, because she wanted the Senate to hold a "fair trial" for the president, with witnesses. This angered some Democrats who saw Pelosi as undermining the urgency of the impeachment. The Senate did not end up calling witnesses.