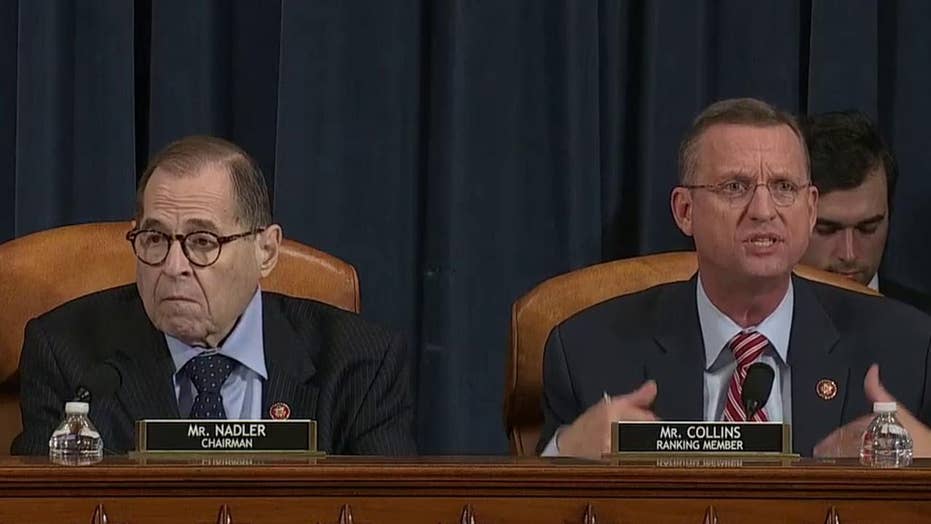 The House Judiciary Committee is poised to be the scene of another major partisan clash Thursday as lawmakers press ahead with two articles of impeachment against President Trump, ahead of an initial vote expected by day's end likely to advance the measures to the floor.

The final "markup" process began Wednesday evening, immediately breaking out into fiery disagreement. Committee Chairman Rep. Jerrold Nadler, D-N.Y., argued that it would be unsafe to wait until the 2020 election to remove Trump from office.

"We cannot rely on an election to solve our problems when the president threatens the very integrity of that election," Nadler claimed during Wednesday's session.

Democrats from districts that supported Trump in 2016, however, have been less enthusiastic. Recent polls have shown declining support for impeachment in key swing states, with two polls released Wednesday indicating that most Americans did not want Trump removed.

Politico reported earlier this week that the numbers were making a "small group" of moderate Democrats, who have held seats in districts where Trump won in 2016, nervous about how to vote. They instead have suggested Trump be censured, which would prevent the GOP from holding a potentially damaging Senate trial and give them political cover in the upcoming election.

The House is now composed of 431 current members, meaning Democrats would need 217 yeas to impeach Trump. There are currently 233 Democrats, so Democrats could lose only 16 of their own and still impeach the president. Among the House Democrats, 31 represent more moderate districts that Trump carried in 2016.

Freshman Rep. Elissa Slotkin, D-Mich. – who flipped a GOP district in 2018 that Trump won by seven points in 2016 – told Fox News last month that she was tentatively weighing all the evidence. On Wednesday, she confirmed that she's still undecided.

"The phones are ringing off the hook," she told CNN. "We literally can't pick up the phones fast enough — and it's people on both sides of it."

Republicans, meanwhile, have vociferously opposed the impeachment effort. The committee's ranking member, Rep. Doug Collins of Georgia, stated that Democrats have been trying to impeach Trump since he took office. He echoed the White House's argument that the impeachment was politically motivated theater, long in the works and foreshadowed openly by Democrats for months, if not years.

He and Rep. Jim Sensenbrenner, R-Wis., each argued that unlike previous presidents who have faced impeachment, Trump was not accused of an offense actually defined by law: neither "abuse of power" nor "obstruction of Congress" is a recognized federal or state crime. Those are the two offenses outlined in the articles of impeachment before the committee. (The separate charge of contempt of Congress, according to the DOJ's Office of Legal Counsel, exempts the president for separation-of-powers reasons.)

The markup is expected to go until Thursday afternoon. If the committee votes to approve the articles of impeachment, as expected, there will likely be an impeachment vote on the House floor in the middle of next week.

The articles center on Trump's efforts to pressure Ukraine to launch an investigation into his political rivals – namely, former vice president Joe Biden – while withholding aid. Democrats argue Trump wrongly used U.S. aid and the prospect of a White House meeting as leverage, but Trump denies doing so.