Catherine Pugh, the disgraced former Baltimore mayor convicted of using her book sales to help fund a political career, is reportedly among those seeking clemency from President Donald Trump before he leaves office.

A database on the Department of Justice’s website shows that Pugh has filed a petition to have her three-year prison sentence commuted. 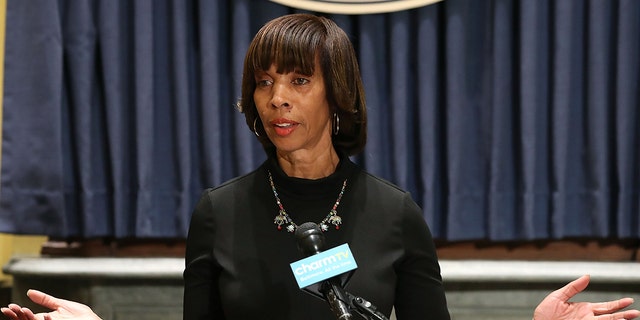 Baltimore Mayor Catherine Pugh talks about the late-night removal of four confederate statues in the city, on August 16, 2017 in Baltimore, Maryland. (Getty Images)

Pugh, 70, was sentenced last year following her conviction on federal tax evasion and conspiracy charges related to the sale of her "Healthy Holly" books.

HOW PRESIDENTIAL PARDONS REALLY WORK: AN INSIDE LOOK AT THE FACTORS THAT GO INTO IT

Authorities also said Pugh received $500,000 from the University of Maryland Medical System, where she was a board member, for 100,000 copies of her books, but there was no contract. The system described some of the purchases as "grants" in federal filings.

Health care provider Kaiser Permanente also disclosed that it had paid Pugh's Healthy Holly LLC about $114,000 between 2015 and 2018 for about 20,000 copies of her books. Pugh oversaw Baltimore's spending board in 2017, when the city awarded a $48 million contract to the Kaiser Foundation Health Plan for the Mid-Atlantic States Inc.

President Trump is expected to issue between 50 and 100 commutations and pardons before he leaves office on Wednesday.

Two sources familiar with the list told Fox News that the announcement of pardons will likely come in one large batch on Tuesday, but there is a slight chance the White House will wait to make them official Wednesday morning. The president has until noon on Wednesday to do so.

Fox News has reached out to Pugh’s lawyer with a request for comment.