A push by Republicans in Georgia to scrap absentee drop boxes currently being used in early voting in the state's twin Senate runoff elections was shot down on Thursday.

A federal judge in the United States District Court for the Southern District of Georgia, which is situated in Augusta, dismissed the case brought by the 12th Congressional District Republican Committee. The judge said that the plaintiffs had no standing and that courts shouldn’t change election rules so close to an election.

The two Senate runoff elections, which will be held on Jan. 5, will determine if the Republicans keep their majority in the Senate, or if the Democrats narrowly control both houses of Congress as well as the White House.

Early absentee voting has been underway for a couple of weeks in Georgia in the two contests, and early in-person voting at polling stations kicked off on Monday. More than 900,000 people have already voted in the twin elections, according to the latest data from the state, with 427,000 of those votes being cast by absentee ballots.

The dismissed suit contended that procedures used to process absentee ballots during last month’s general election – such as signature matching and ballot drop boxes – could allow for massive fraud in the runoff contests.

The suit also asked that local election officials be prohibited from opening ballot envelopes before Election Day. And it also aimed to invalidate guidance from the Secretary of State’s Office on the proper way officials needed to verify signatures on absentee ballots. 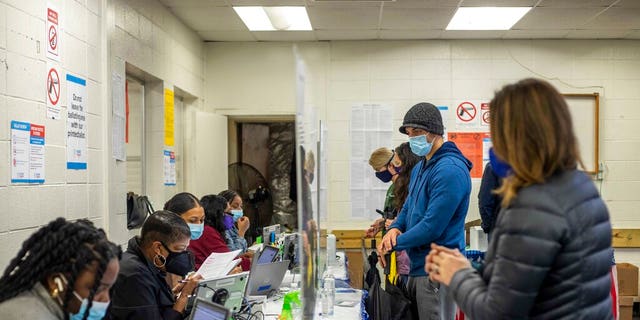 "We are not even on the eve of an election," Hall said in turning down the case. "We are, as it relates to this particular election, closing in on halftime."

CLICK HERE FOR THE LATEST ELECTION RESULTS FROM FOX NEWS

The lawsuit was the latest in a string of what have been unsuccessful cases challenging the integrity of the presidential election in Georgia.

President Trump narrowly lost Georgia and its 16 electoral votes to President-elect Joe Biden, by just under 12,000 votes out of nearly 5 million cast. Biden became the first Democrat to carry the state in the White House race in more than a quarter-century. The president has repeatedly charged that there was massive voter fraud in Georgia and tried unsuccessfully to force the state’s Republican governor and secretary of state to not certify the results.

The lawsuit named Georgia Secretary of State Brad Raffensperger, members of the State Elections Board and a county elections board, as defendants.

The balance of power for the next Senate coming out of last month’s elections is 50 Republicans and 48 Democrats. This means Democrats must win both of Georgia’s runoffs to make it a 50-50 Senate. If that occurs, Vice President-elect Kamala Harris would be the tie-breaking vote, giving her party a razor-thin majority in the chamber. Such a scenario would make it easier for Biden to see his proposals passed through Congress.

In Georgia, where state law dictates a runoff if no candidate reaches 50% of the vote, Republican Sen. David Perdue narrowly missed avoiding a runoff, winning 49.75% of the vote. Democratic challenger Jon Ossoff trailed by roughly 87,000 votes.

In the other race, Republican Sen. Kelly Loeffler captured nearly 26% of the vote in a whopping 20-candidate special election to fill the final two years of the term of former GOP Sen. Johnny Isakson. Loeffler was appointed by Republican Gov. Brian Kemp after Isakson stepped down to due health reasons. Democratic candidate Raphael Warnock, won nearly 33% of the vote in the special election.