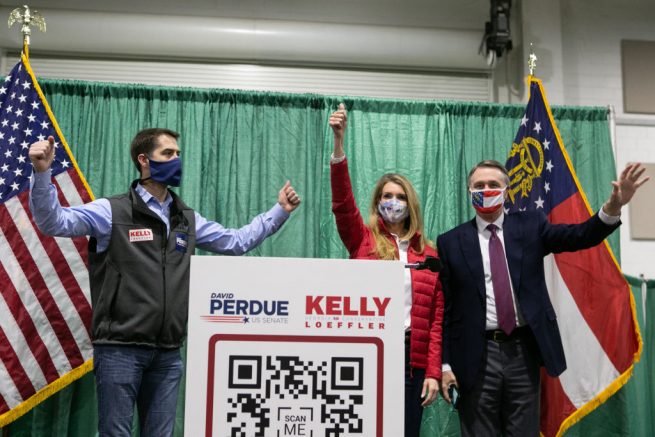 (R to L) U.S. Sen. David Purdue (R-GA) and Sen. Kelly Loeffler (R-GA) wave to the crowd of supporters at a “Defend the Majority” rally with Sen. Tom Cotton (R-AR) at the Georgia National Fairgrounds and Agriculture Center on November 19, 2020 in Perry, Georgia. (Photo by Jessica McGowan/Getty Images)

According to reports, the ‘Senate Leadership Fund’ is spending $35 million to support Sen. David Perdue’s (R-Ga.) re-election bid against Democrat candidate Jon Ossoff. In some of their latest ads, the group targeted Ossoff’s ties to China as well as his far-left ideals.

In the meantime, the PAC ‘American Crossroads’ is spending $35 million to help Sen. Kelly Loeffler (R-Ga.) in her race against Democrat candidate Raphael Warnock.

Warnock came under fire for resurfaced footage in which he claimed: “You cannot serve God and the military.” Both Republican candidates in Georgia condemned Warnock’s statement, with Loeffler calling his comments “disgraceful.”

However, this is only the tip of the iceberg as a recent campaign ad sponsored by ‘American Crossroads‘ took aim at Warnock for his reported association to the ‘Defund the Police’ movement.

“Raphael Warnock is a radical who compared police officers to gangsters and thugs,” the campaign ad said. “That’s why far-left defund the police extremists are flocking to Georgia because he’s one of them.”

This came as Republican PACs dropped a total of about $80 million on Georgia’s GOP Senate candidates, which included $9 million spent on radio and television advertisements.

All sides are spending heavily in the crucial elections with Republicans hoping to maintain a solid majority in the Senate. The run-off elections are set to take place on January 5.