Sen. Josh Hawley, R-Mo., will publish his book "The Tyranny of Big Tech" through conservative Regnery Publishing after Simon & Schuster dropped him following the pro-Trump riot at the U.S. Capitol on Jan. 6, Regnery announced on Monday.

"It's discouraging to see [Simon & Schuster] cower before the 'woke mob,' as Sen. Hawley correctly calls it. Regnery is proud to stand in the breach with him. And the warning in his book about censorship obviously couldn't be more urgent," Regnery president and publisher Thomas Spence said in a statement.

Simon & Schuster would have published Hawley's book in June, and now Regnery says it will be released in spring 2021. Regnery was founded in 1947 and has published authors such as William F. Buckley Jr., Ann Coulter, Newt Gingrich and Sen. Ted Cruz, R-Texas. 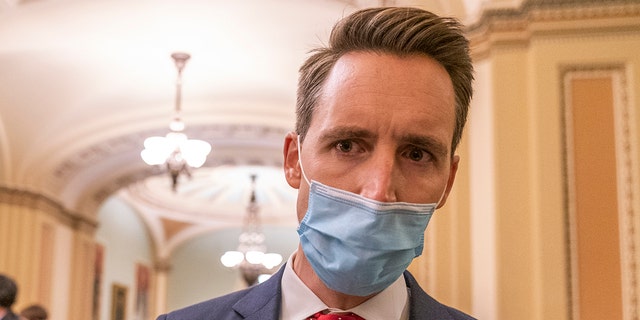 Sen. Josh Hawley, R-Mo., speaks to reporters as he returns to the Senate Chamber at the Capitol, Jan. 7, 2021, in Washington. (AP Photo/Manuel Balce Ceneta)

"We did not come to this decision lightly," Simon & Schuster said in a statement to The New York Times. "As a publisher, it will always be our mission to amplify a variety of voices and viewpoints. At the same time, we take seriously our larger public responsibility as citizens, and cannot support Sen. Hawley after his role in what became a dangerous threat."

"This could not be more Orwellian," Hawley wrote. "Simon & Shuster is canceling my contract because I was representing my constituents, leading a debate on the Senate floor on voter integrity, which they have now decided to redefine as sedition."

"It's a direct assault on the First Amendment," he continued. "Only approved speech can now be published. This is the Left looking to cancel everyone they don't approve of. I will fight this cancel culture with everything I have. We'll see you in court."

Fox News' Joseph A. Wulfsohn contributed to this report.