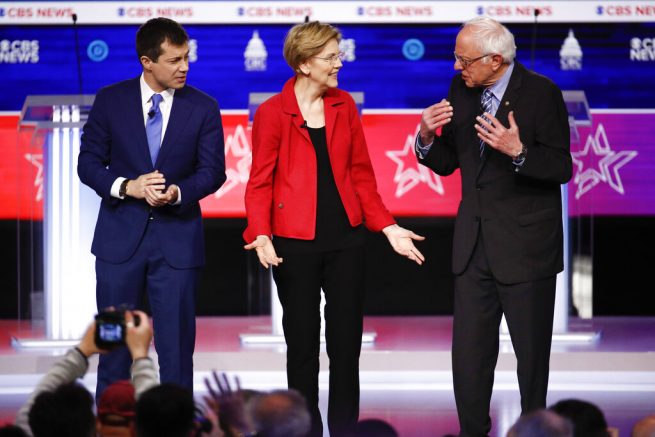 The candidates sparred over key issues Tuesday night, including health care costs, gun control and foreign affairs. However, a repeating theme throughout the night seemed to be the targeted attacks against Sen. Bernie Sanders (D-Vt.).

“Bernie and I agree on a lot of things, but I think I would make a better president than Bernie,” said Sen. Elizabeth Warren (D-Mass.). “And the reason for that is that getting a progressive agenda enacted is going to be really hard and it’s going to take someone to dig into the details to make it happen.”

Sanders appeared to take those attacks in stride as he still remains a front-runner in the race, following his victories in New Hampshire and Nevada.

“I’m hearing my name mentioned a little bit tonight,” he stated. “I wonder why.”

Meanwhile, former New York City Mayor Mike Bloomberg, who was appearing on the debate stage for the second time, attempted to redeem himself after the last debate. He touched on recent reports, which have claimed Russia is helping Sanders’ campaign win the nomination to ensure President Trump’s reelection come November.

“Vladimir Putin thinks that Donald Trump should be President of the United States and that’s why Russia is helping you (Sanders) get elected, so that you’ll lose to him,” Bloomberg told Sanders on the debate stage.

Former Vice President Joe Biden, once again, faced questions on his electability, specifically when it came to his support among African Americans in South Carolina. This is a state in which he said would have a defining primary in the 2020 election.

The Democrat presidential candidates are expected to return to the debate stage on March 15 in Arizona.