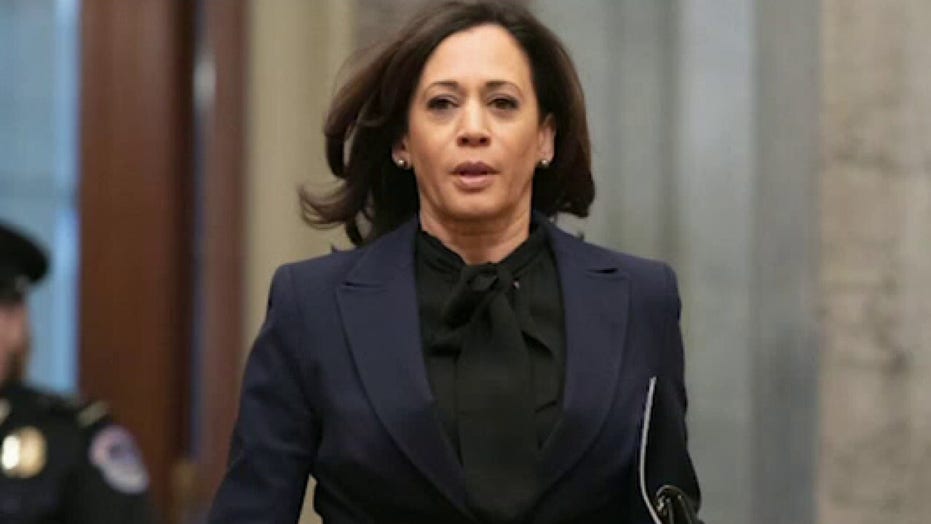 Trump campaign reacts to Biden-Harris ticket: This is no longer your grandfather's Democratic Party

Joe Biden's selection of Sen. Kamala Harris to be his running mate represents the complete socialist takeover of the Democratic Party, says Mercedes Schlapp, senior adviser for the Trump 2020 campaign.

Sen. Kamala Harris, fresh off being announced Joe Biden's running mate, is wasting no time going on offense against President Trump as the presumptive Democratic nominee for vice president.

“I know that winning this race will be a tougher challenge than any I’ve faced in my lifetime, but make no mistake: I’m not afraid of Donald Trump,” Harris said in a fundraising email distributed to Biden supporters. “I’ve been standing up to Trump and people like him for my entire career. He doesn’t scare me.

“He’s a serial predator. I’ve spent my career putting them away,” she added.

Harris' comments appeared to be in reference to the multiple accusations of sexual misconduct lodged at President Trump over the last several years, which the president has repeatedly denied.

The allegations largely started after the release of the “Access Hollywood” video in which the president infamously said of touching women: “I don’t even wait. And when you’re a star, they let you do it. You can do anything.”

KAMALA HARRIS ON TRUMP: 'WE HAVE A PREDATOR LIVING IN THE WHITE HOUSE'

Harris has used the word “predator” before, during a campaign event in Iowa in July 2019, prior to her dropping from the presidential race.

“I know predators, and we have one living in the White House."

The Trump campaign released an attack ad on Biden’s vice presidential pick minutes after the announcement was made Tuesday.

The video concludes with nicknames for the candidates which Trump will likely use on the campaign trail, saying, “Slow Joe and Phony Kamala. Perfect together. Wrong for America.”

Trump wasted no time in ramping up his rhetoric against Harris, referring to her as “nasty,” a term he repeatedly used to describe Hillary Clinton during the 2016 presidential race.

"I’ve been watching her for a long time. I was a little surprised," Trump said Tuesday during a press briefing at the White House. "She was extraordinarily nasty to Judge Kavanaugh.

“She was nasty to a level that was just a horrible thing, the way she treated now-Justice Kavanaugh, and I won’t forget that soon,” Trump said.

"She was very, very nasty. She was probably nastier than even Pocahontas to Joe Biden," Trump added, referring to Sen. Elizabeth Warren, D-Mass., who endorsed Biden and has already voiced her support for Harris as vice president.

But while Trump’s unusual campaign rhetoric surprised politicians and voters alike in 2016, supporters and critics of the Biden-Harris ticket are unsure whether it will have the same effect this time around.

"I don’t think that you could have a tougher opponent," Rev. Al Sharpton said Tuesday on MSNBC. "I know the Trump people are preparing all they can to throw at her, but you cannot have a better person to throw it at — that it will bounce off her like it didn’t mean anything because she’s been in tough fights before.”

The Biden-Harris ticket had their most successful fundraising day the Biden campaign has yet seen, raising over $10.8 million from grassroots fundraising in just four hours Tuesday.

The Biden campaign did not disclose to Fox News the total amount they raised Tuesday.

But the amount raised in the four hours following Biden's announcement is comparable to the highest Biden fundraising campaign event he has had–when he was on the ticket with former President Barack Obama–which raised $11 million.

The Republican National Committee (RNC) reported that the Trump campaign raised $165 million in contributions during the month of August. The RNC claimed to have $300 million in cash through fundraising at the end of July.

The Biden campaign reported $294 million in coffers by the end of July – suggesting that Trump’s once large lead in cash-on-hand funds is no longer the case.