In an interview Friday on PBS's "Firing Line," Manchin said the senators' insistence on objecting to Pennsylvania’s Electoral College votes even after supporters of President Trump stormed the U.S. Capitol was "totally unconscionable" and triggering the 14th Amendment is now an option.

HAWLEY DEFENDS OBJECTION TO ELECTORAL COLLEGE RESULTS: 'I WILL NOT BOW TO A LAWLESS MOB'

The third section of the amendment states that no lawmaker holding office "shall have engaged in insurrection or rebellion against the same, or given aid or comfort to the enemies thereof."

Congress may "by a vote of two-thirds of each House, remove such disability," the section states.

Added to the Constitution after the Civil War, the amendment was designed to cover instances of sedition, Manchin told host Margaret Hoover.

"Would you support, senator, the removal of Sen. Hawley and Sen. Cruz through the 14th Amendment, Section 3?" Hoover asked.

"Well, they should look, absolutely," he said, referring to the Senate. "I mean, basically, that should be a consideration."

Cruz "understands that," Manchin added. "Ted's a very bright individual, and I get along fine with Ted. But what he did was totally outside the realm of our responsibilities or our privileges that we have."

None of the senators immediately responded to requests for comment from Fox News. 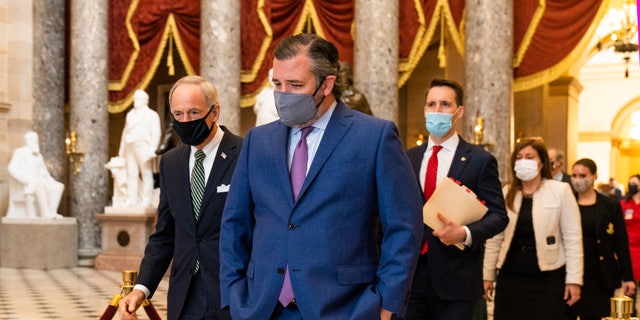 Washington, D.C., U.S. Attorney Michael Sherwin told reporters Friday that investigator would have more than 300 open criminal cases by the end of the day.

Democrats have accused Hawley and Cruz of inciting Trump supporters for political gain, a charge the senators have vehemently denied.

In an interview with Politico last week, Cruz said he was debating principle, law and the Constitution, which he said is "the exact opposite of inciting violence."

Manchin, however, said there was "no way" the Republican senators could not be considered complicit in the day's events.

"That they think they can walk away and say ‘I just exercised my right as a senator?’ Especially after we came back here and after they saw what happened," he said.

"I want to see all of those people that made the objection and stuck with their objection … were you sending out fundraising requests while this was going on — the insurrection to our Capitol — tell me that," he told PBS. 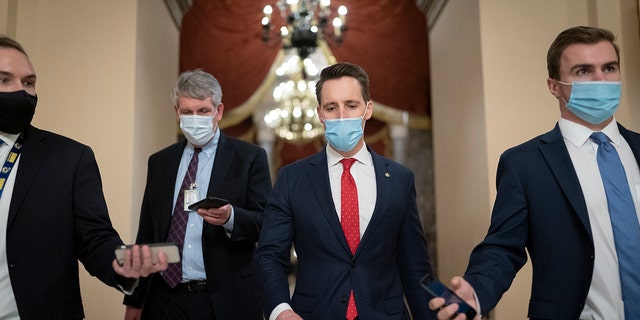 Cruz and Hawley were also slammed for sending out fundraising messages to their constituents as rioters pushed toward the Capitol's doors.

Responding to a tweet from Rep. Alexandria Ocasio-Cortez, D-N.Y., on Jan. 7, Cruz said he told his team to halt fundraising "within minutes" of the attack and denied that debating the formation of a commission to review election results "somehow supports terrorist violence."

Hawley — though not mentioning his fundraising efforts — wrote a Wednesday op-ed in The Missouri Times blasting "much of the media" and "many members of the Washington establishment" who "want to deceive Americans into thinking those who raised concerns incited violence, simply by voicing the concern."

"Some wondered why I stuck with my objection following the violence at the Capitol," Hawley added. "The reason is simple: I will not bow to a lawless mob, or allow criminals to drown out the legitimate concerns of my constituents."

Hawley said constituents had contacted him about concerns over election integrity after Trump's loss in states he doesn't represent.

Manchin said that he has talked with Hawley he could tell the matter is "weighing on him."

Both senators are facing calls to resign for continuing their objections to an election in which allegations of widespread voter fraud have been debunked and tossed out of court.