"With all due respect to Rep. Crenshaw, this is a minority view within the minority party," Gaetz tweeted to Crenshaw.

Crenshaw said earlier that Cheney had a "hell of a lot more backbone than most" and called her a "principled leader."

Cheney and nine other House Republicans voted along with Democrats to impeach Trump Wednesday for "incitement of insurrection" after a mob of his supporters stormed the Capitol on Jan. 6 in an unsuccessful attempt to stop the certification of President-elect Joe Biden's electoral college win over the president. 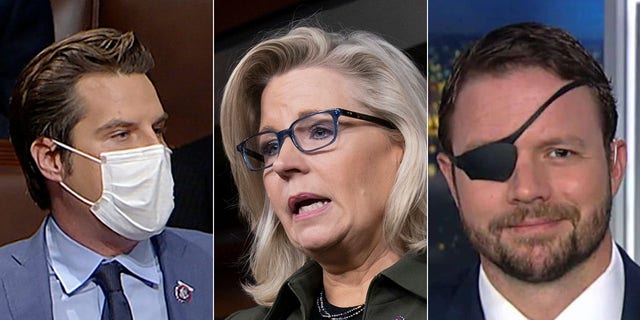 Cheney, the highest-ranking GOP House member to vote for impeachment, has faced calls from a handful of Republican colleagues for her to resign from her leadership position over the vote.

The Wyoming congresswoman, who wrote Tuesday "There has never been a greater betrayal by a president of the United States of his office and his oath to the Constitution," rebuffed the resignation calls.

"I'm not going anywhere," she told a reporter. "This is a vote of conscience. It's one where there are different views in our conference."

Staffers for Gaetz and Crenshaw did not immediately respond to an email from Fox News.