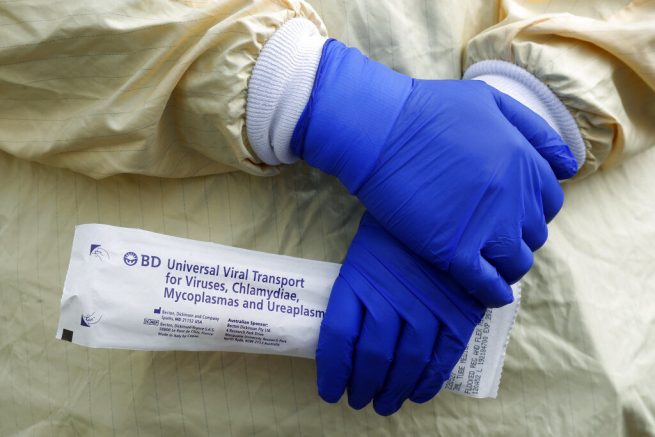 A nurse holds swabs and a test tube kit to test people for COVID-19, the disease that is caused by the new coronavirus, at a drive-thru station set up in the parking lot of the Beaumont Hospital in Royal Oak, Mich., Monday, March 16, 2020. (AP Photo/Paul Sancya)

A Michigan hospital has criticized by frontline health care workers who have said they are exceedingly outnumbered by patients. On Tuesday, Detroit emergency room nurse Sal Hadwan said workers reached their breaking point over the weekend and were forced to leave mid-shift.

Sinai Grace Hospital ordered several of its emergency room staff to leave the building after they refused to see patients for hours. On Sunday, a group of nurses scheduled to work the night shift said they staged a sit-in in their break room in response to an unsafe patient load.

According to nurses, the emergency room has been crowded with patients for weeks with less than 10 staff members working and roughly 25 patients assigned to each. Additionally, nurses have said the facility is running low on personal protective equipment.

“But tonight is the breaking point for us because we cannot safely take care of your loved ones out here with just six to seven nurses and multiple vents, multiple people on drips, it’s not right,” Hadwan stated.

During the sit-in, nurses reportedly asked the hospital to call on more staff members to help ease patient loads. However, the hospital said they could not bring on additional workers and gave nurses an ultimatum of continuing to work or go home.

Since the incident, the hospital has defended its decision. Sinai Grace officials have said patients continued to receive proper care after the nurses left and have been actively scouting for qualified personnel to help with the abundance of patients.

However, nurses on the frontline have said the hospital is not doing enough. While it’s unclear if the nurses were reprimanded, multiple employees have said they returned to work the following day.

The state saw its first case of COVID-19 just four weeks ago. Michigan now ranks third in the nationwide tally of coronavirus infections and deaths.