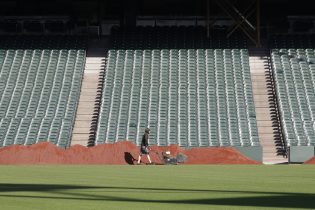 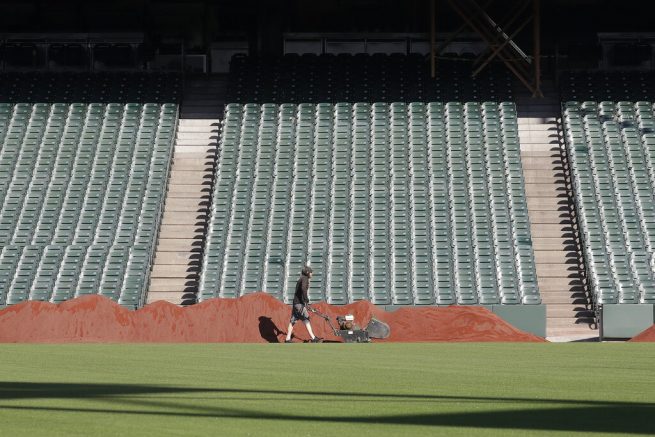 A grounds crew worker pushes equipment at Oracle Park, the San Francisco Giants’ baseball ballpark, in San Francisco, Thursday, March 26, 2020. There will be empty ballparks on what was supposed to be Major League Baseball’s opening day, with the start of the Major League Baseball regular season indefinitely on hold because of the coronavirus pandemic. (AP Photo/Jeff Chiu)

As Major League Baseball teams postpone ‘opening day’ due to coronavirus concerns, uncertainty has continued to grow regarding when or if the season will finally be able to kick-off.

However, one MLB player is giving away his paychecks to those in need during the pandemic. On Saturday, Houston Astros pitcher Justin Verlander and his supermodel wife Kate Upton posted a video on Twitter announcing their charitable contributions to organizations directly helping those battling COVID-19 on multiple fronts.

Verlander sympathized with patients who have the virus and those that have lost their jobs during quarantine orders across the country.

“Obviously this is an extremely difficult time for the entire world,” he stated. “There are so many people that are in need whether its on the frontlines battling this disease head-on or someone who’s at home and lost their job and needs to provide necessities such as food and water, so we have decided to donate that paycheck.”

This gesture came after nearly 10 million Americans were forced to file for unemployment in March as a result of the outbreak.

Upton said they will showcase the organizations they choose each week as a gesture of appreciation for the incredible work they do in U.S. communities.

“We’re going to pick an organization every week who’s doing really good work right now and donate the entire week’s paycheck to that organization,” she explained. “We’ll also be highlighting the organization that we choose, so that everyone can see the amazing work they’re doing right now.”

According to CBS Sports, a recent agreement by the Major League Baseball Players Association and team owners will ensure players will still be paid for the time being. This means players who are under “guaranteed contracts” will receive weekly payments, which will come to a total of just over $286,000 during the 60-day shutdown.

In the meantime, the couple said they will be announcing the first organization as soon as Verlander receives his MLB paycheck from the agreement. The couple went on to encourage everyone to stay safe and continue to follow CDC social distancing recommendations during these unprecedented times.