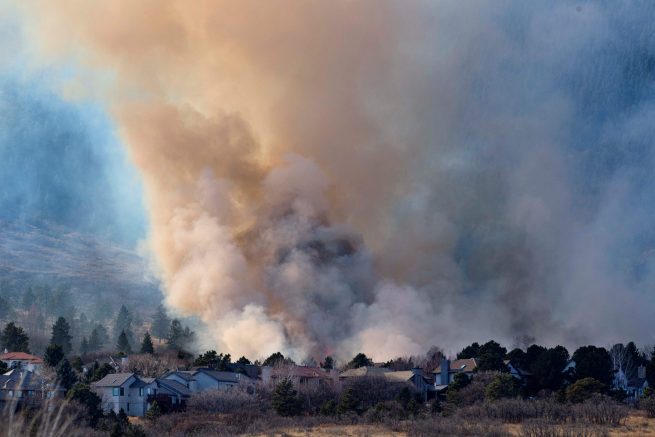 Flames from the Bear Creek Fire in Colorado Springs, Colo. are seen above homes. (Christian Murdock/The Gazetter via AP)

A Colorado fire, named the Bear Creek Fire, has been successfully stopped after firefighters reported 100 percent containment of the blaze. This was announced Friday after the 26 acre fire sparked near Colorado Springs Thursday, in turn, prompting an evacuation of more than 230 homes.

Dozens of firefighters worked from the ground and air to combat the flames with reports noting the fire came within 10 feet of some homes. Fortunately, no structures or lives were lost, which fire officials credit to fire mitigation efforts by resident. the city and the county.

The firefighters were facing fast-moving flames fueled by dry vegetation and windy conditions. However, the removal of excess vegetation from around homes helped them keep the blaze from getting too close. Officials said mitigation efforts also kept the flames low to the ground, where they are easier to fight.

“Reduced the fuels, reduced the spread of fire, reduced the rate of spread, which allowed us firefighters to get in there and to really make a good attack on this fire,” said BC Steve Wilch, incident commander.

The cause of the fire remains under investigation. Moving forward, firefighters are urging residents to continue being proactive in their efforts to protect their homes from future wildfires.