Vice President Mike Pence on Wednesday told Congress that he does not believe he has the ability to "unilaterally" accept or reject electoral votes, breaking with President Trump, who has mounted pressure on him to send the results of the presidential election back to the states.

In a letter to members of Congress ahead of Wednesday’s joint session to certify the results of the presidential election and the Electoral College, where he is serving as the presiding officer, Pence said he shares the "concerns of millions of Americans about the integrity of this election."

"The American people choose the American President, and have every right under the law to demand free and fair elections and a full investigation of electoral misconduct," Pence said. "As presiding officer, I will do my duty to ensure that these concerns receive a fair and open hearing in the Congress of the United States."

He added: "Objections will be heard, evidence will be presented, and the elected representatives of the American people will make their decision."

Pence acknowledged that "some believe that as Vice President, I should be able to accept or reject electoral votes unilaterally."

"Others believe that electoral votes should never be challenged in a Joint Session of Congress," Pence wrote. "After a careful study of our Constitution, our laws, and our history, I believe neither view is correct." 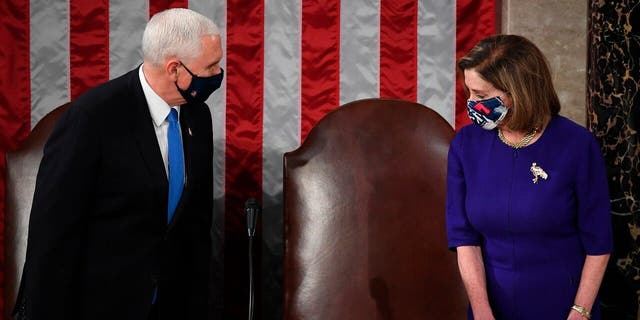 Speaker of the House Nancy Pelosi, D-Calif., and Vice President Mike Pence talk before a joint session of the House and Senate convenes to count the Electoral College votes cast in November's election, at the Capitol in Washington, Wednesday, Jan. 6, 2021. (Saul Loeb/Pool via AP)

Pence went on to say that "when disputes concerning a presidential election arise, under Federal law, it is the people’s representatives who review the evidence and resolve disputes through a democratic process."

TRUMP PRESSURES PENCE AHEAD OF ELECTORAL COLLEGE CERTIFICATION: 'THIS IS A TIME FOR EXTREME COURAGE'

But Pence said it is his "considered judgment that my oath to support and defend the Constitution constrains me from claiming unilateral authority to determine which electoral votes should be counted and which should not."

Pence added that he will do his "duty to see to it that we open the certificates of the Electors of the several states, we hear objections raised by Senators and Representatives, and we count the votes of the Electoral College for President and Vice President in a manner consistent with our Constitution, laws and history."

"So help me God," Pence wrote.

Pence sent the letter to Congress as the president addressed thousands of supporters during a pro-Trump rally in Washington, D.C., on the sidelines of the joint session of Congress to certify the results of the presidential election.

During his remarks, the president said he will "never give up" and "never concede," and renewed pressure on Pence to "do the right thing" and decertify the election results, warning that he is "going to be very disappointed in you" if he does not.

"If Mike Pence does the right thing, we win the election," Trump said, adding that "we are supposed to protect our country and support our Constitution."

"States want to re-vote. The states got defrauded, they were given false information and now they want it back," Trump continued, adding that "all Pence has to do is send it back to the states…and we become president, and you are the happiest people."

Trump said that Pence acting "doesn’t take courage," but "what takes courage is to do nothing."

"And then we’re stuck with a president who lost the election by a lot, and we have to live with that for the next four years," Trump said, referring to his Democratic rival Joe Biden. "We’re not going to let that happen."

The president, in recent hours, has increasingly put pressure on Pence to intervene during the joint session, tweeting early Wednesday: "Do it Mike, this is a time for extreme courage!"

The president has insisted that "states want to correct their votes, which they now know were based on irregularities and fraud," adding that the "corrupt process never received legislative approval."

"All Mike Pence has to do is send them back to the States, AND WE WIN," Trump tweeted.

The president, hours before, tweeted that if Pence "comes through for us, we will win the presidency."

"Many states want to decertify the mistake they made in certifying incorrect & even fraudulent numbers in a process NOT approved by their State Legislatures (which it must be.)"

The president has said that he and Pence "are in total agreement that the Vice President has the power to act" and has claimed that the election "was illegal."

Trump went on to say that Pence has "several options under the U.S. Constitution."

"He can decertify the results or send them back to the states for change and certification," Trump said. "He can also decertify the illegal and corrupt results and send them to the House of Representatives for the one vote for one state tabulation."

A spokesman for Pence declined to comment on the president’s latest tweets, but White House officials told Fox News on Tuesday that Pence will "follow the law," saying Pence is "taking a very diligent and studious approach to his job tomorrow."

"He has consulted at length with staff. He has gone through the Electoral Count Act several times," an official said. "He has read legal opinions, met with the Senate parliamentarian and consulted with outside experts on the subject matter."

But those officials add that "the vice president will follow the law" and that he will act "with fidelity to the law and the Constitution."

The president’s remarks also come just hours after the Georgia Senate runoffs, where Democrats are projected to pick up one — and possibly two — seats, which would hand them the majority in the U.S. Senate.

The president went on to say that the Democrats "used the pandemic as a way of defrauding the people in a proper election."