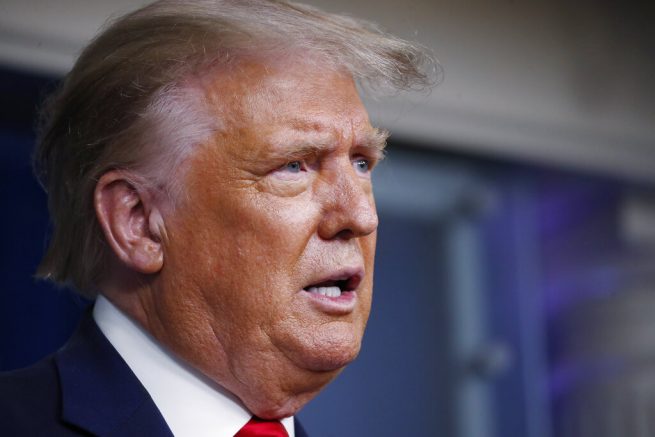 President Donald Trump speaks during a briefing with reporters in the James Brady Press Briefing Room of the White House, Monday, Aug. 3, 2020, in Washington.(AP Photo/Alex Brandon)

President Trump has suggested that Democrats are hijacking stimulus negotiations.

While speaking to reporters on Monday, he maintained the U.S. is doing well controlling the spread of COVID-19 compared to other nations that have seen flare-ups like Italy, France and Spain.

The president insisted he’s taking an active roll in negotiations with Democrat leaders. However, he said he’s reluctant to give Democrats the trillion dollars in aid they are asking for.

“They want to bail out cities and states that have done a bad job over a long period of time, nothing to do with coronavirus or a China virus or whatever you want to call it,” stated President Trump. “They want a trillion dollars in bailout money and a lot of people don’t want to do that because we don’t think it’s right.”

The president said he’s looking into an executive order to halt evictions during the pandemic if Democrats fail to negotiate on stimulus measures.

“The Democrats have run some very bad states and some very, very bad cities,” he continued. “And a lot of people don’t want to give them a trillion dollars to reward them for doing a bad job.”