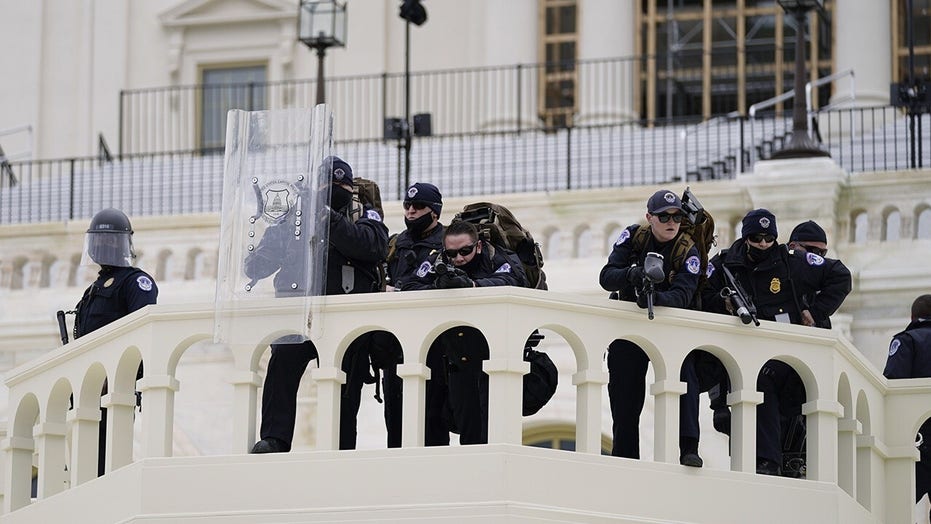 US Capitol complex locked down as protests grow

Amidst chaos and violence on Capitol Hill Wednesday in support of President Trump, both he and his son Donald Trump Jr. urged peace among protesters who had forced their way into the U.S. Capitol Building.

"Please support our Capitol Police and Law Enforcement. They are truly on the side of our Country. Stay peaceful!" the president wrote on Twitter, hours after addressing the protesters and promising that he would "never concede."

Soon after, he added:

As Congress met to count and certify the electoral results, protesters violently clashed with police before storming the capitol building. The session quickly recessed, and Vice President Mike Pence, who presided over the joint session, was rushed out of the building and all others were told to shelter in place and take cover.

TRUMP SLAMS PENCE FOR FAILING TO DECERTIFY RESULTS OF ELECTION

"This is wrong and not who we are. Be peaceful and use your 1st Amendment rights, but don’t start acting like the other side. We have a country to save and this doesn’t help anyone," Trump Jr. wrote on Twitter, quoting a video of the president's supporters ramming their way past federal police.

Authorities barricaded the House chamber as they tried to get members, aides and journalists out of the chamber. Lawmakers have been told to put on gas masks as police were using tear gas in the Rotunda.

A congressional source told Fox News that the Cannon House Office Building and Madison Library of Congress Building were briefly evacuated because of bomb threats after several suspicious packages were reportedly found in the area.

Former White House Communications Director Alyssa Farah called on the president to condemn the rioters' actions. "Condemn this now, @realDonaldTrump – you are the only one they will listen to. For our country!"

Mick Mulvaney, Trump's former acting White House chief of staff, said after the president's first tweet that Trump's actions fell short of calming the situation. "The President's tweet is not enough. He can stop this now and needs to do exactly that. Tell these folks to go home," he wrote on Twitter.

"Now is the time for the President to be presidential," he wrote minutes earlier.

Just before pandemonium broke out, Trump lashed out on Twitter at his second in command for not refusing to certify election results. "Mike Pence didn’t have the courage to do what should have been done to protect our Country and our Constitution, giving States a chance to certify a corrected set of facts, not the fraudulent or inaccurate ones which they were asked to previously certify. USA demands the truth!"

The president’s tweets come after he pressured his vice president for the last several days, claiming Pence had the power to decertify the results of the 2020 presidential election.

Shortly before the joint session began, Pence said that, despite the pressure from the president, he does not believe that he "unilaterally" has the ability to accept or reject electoral votes.

But as the president addressed the pro-Trump rally at the same time, he said he will "never give up" and "never concede," and renewed pressure on Pence to "do the right thing" and decertify the election results, warning that he is "going to be very disappointed in you" if he does not.