Feds warn violent extremism likely to surge in 2021 as Capitol, statehouses are fortified for inauguration

Federal prosecutors in a document filed Thursday said that they believe the pro-Trump mob that stormed the U.S. Capitol aimed to "capture and assassinate" elected officials and argued that the man who was seen wearing a horned headdress and face paint should be denied bail.

The man, Jacob Chansley, was arrested and charged in Arizona on Saturday, according to the Justice Department. Chansley, a believer in the QAnon conspiracy theory and a Trump supporter, was charged with knowingly breaking into the Capitol building and its grounds, along with violent entry and disorderly conduct.

Ahead of a detention hearing for Chansley that is scheduled for Friday afternoon, prosecutors filed an 18-page document outlining why they believe Chansley shouldn't be released ahead of his trial. Among their reasons, prosecutors say, is the severe nature of what they are accusing Chansley of.

"The crimes charged in the indictment involve active participation in an insurrection attempting to violently overthrow the United States Government. By Chansley’s own admissions to the FBI and news media, the insurrection is still in progress and he intends to continue participating," the filing reads.

"Strong evidence, including Chansley’s own words and actions at the Capitol, supports that the intent of the Capitol rioters was to capture and assassinate elected officials in the United States Government. Chansley left a note on the Senate Chamber dais, where Vice President Mike Pence had been presiding over the session just minutes before, warning 'it's only a matter of time, justice is coming,'" the document continued.

"When questioned as to the meaning of that statement, Chansley went on a lengthy diatribe describing current and past United States political leaders as infiltrators, specifically naming Vice President Mike Pence, former President Barack Obama, former Senator Hillary Clinton and U.S. President-elect Joe Biden as infiltrators involved in various types of wrongdoing," prosecutors added. "Although he stated his note was not a threat, the Government strongly disagrees." 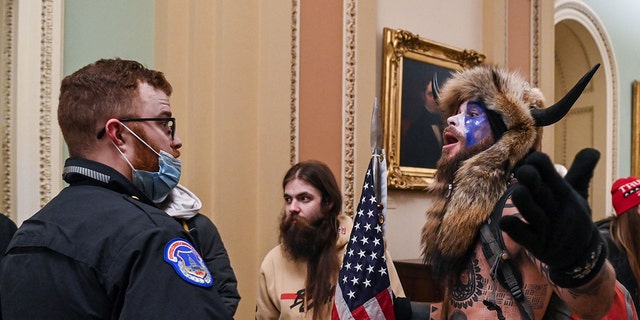 US Capitol police officers try to stop supporters of President Trump, including Jacob Chansley (R), a QAnon supporter known for his painted face and horned hat, to enter the Capitol on Jan. 6, 2021, in Washington, D.C. (SAUL LOEB/AFP via Getty Images)

ZELLO CONFIRMS USE OF WALKIE-TALKIE APP DURING CAPITOL RIOTS, WILL 'BAN ALL MILITIA-RELATED CHANNELS'

A lawyer for Chansley did not immediately respond to a request for comment from Fox News.

The claims by the government that rioters wanted to "capture and assassinate" officials are not necessarily surprising. Some who stormed the Capitol did so while chanting, "Hang Mike Pence."

But what is being alleged by the government itself in a court document makes clear the danger of what amounted to an insurrection aimed at stopping the certification of President-elect Joe Biden's victory. It also brings into focus the fact that the results of the riot that killed multiple people could have been much worse.

Underscoring fears of further unrest during Biden's inauguration next Wednesday – and why prosecutors don't want Chansley released – Chansley said he would return to D.C. on Jan. 20 if he could. "I’ll still go, you better believe it," he told the FBI, according to the filing. "For sure I’d want to be there, as a protestor, as a protestor, f—–’ a."

"Some say the riots were caused by Antifa," House Minority Leader Kevin McCarthy, R-Calif., said on the House floor Wednesday. "There's absolutely no evidence of that, and conservatives should be the first to say so." 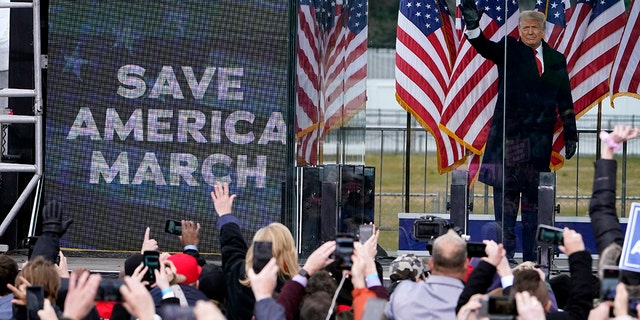 McCarthy's been one of the Republicans who lays the blame for the storming of the Capitol at President Trump's feet.

At least one left-wing activist, John Sullivan, was arrested in the wake of the riots after egging on pro-Trump rioters. He told Fox News he was at the riot to "document" it. But almost all of those arrested for storming the Capitol were public supporters of Trump, like Chansley.

"In an interview with NBC News before his arrest, Chansley boasted about his involvement in the mob that infiltrated the Capitol, driving Congress people and staffers to flee in fear of their lives," the government filing against Chansley reads.

"'The fact that we had a bunch of our traitors in office hunker down, put on their gas masks and retreat into their underground bunker, I consider that a win,'" it quotes Chansley as saying. "Chansley stated that he drove to Washington, D.C. as a part of a group effort, with other 'patriots' from Arizona, at the request of the President that all 'patriots' come to D.C. on January 6, 2021."