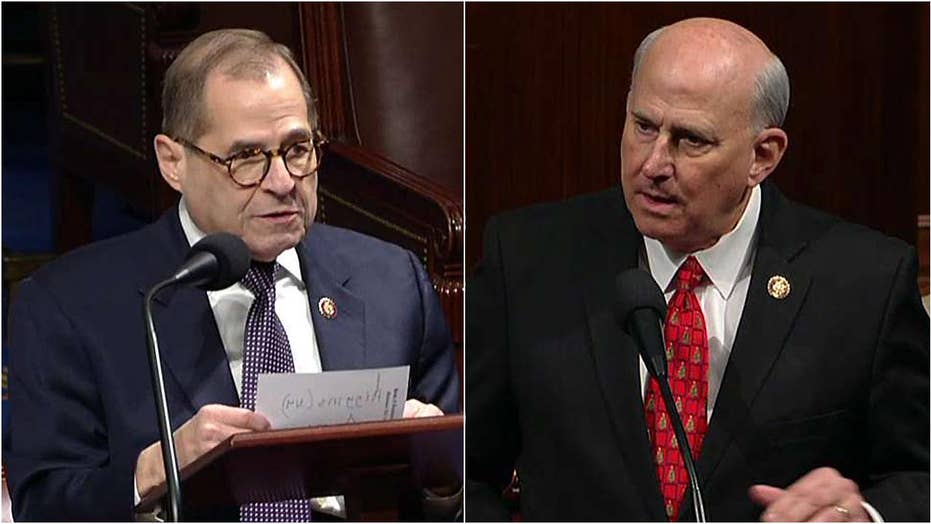 Democratic Rep. Jeff Van Drew hasn’t officially switched parties yet, but the New Jersey congressman said he moved over to stand on the GOP side of the aisle Wednesday for the historic impeachment votes because it was “appropriate.”

The freshman Democrat opposes impeachment and is expected to jump to the Republican Party for political survival in a district President Trump carried in 2016.

“As I’ve said all along, I’m going to vote ‘no,’” Van Drew told reporters at the Capitol. “So I think they [Republicans] are all going to vote ‘no’ so it’s certainly appropriate in this case regardless of any other discussions we might be having.”

HOUSE TO VOTE ON ARTICLES OF IMPEACHMENT AGAINST PRESIDENT TRUMP: LIVE UPDATES

Van Drew, still officially a Democrat, sat with Republicans when impeachment debate kicked off and said he was welcomed warmly. He even got a pep talk from Rep. Steve King, R-Iowa, who was condemned on the House floor in January for white supremacist comments.

“Jeff right now today is the loneliest man in Congress,” King told Fox News. “I’ve got sympathy and empathy for that circumstance. And I just expressed that to him. Let him know [to] follow your conscience and follow your heart in what you do today. Let it be something that fits within who you are and it’ll be OK.”

Van Drew confirmed that King had kind words for him and all the Republicans were “very, very nice.” But he denied feeling lonely: “I have a lot friends,” he told Fox News.

News of Van Drew’s planned party switch broke over the weekend, followed by an exodus of his Democratic staff, who resigned in protest.

Van Drew and Rep. Colin Peterson, D-Minn, were the only Democrats to vote "no" against the launch of the impeachment inquiry on Halloween. And the pair again were the lone dissenters on an earlier vote Wednesday on the rule to kick off the impeachment debate.

“I sometimes believe that not everyone understands the severe seriousness of impeachment. It is how an oligarchy operates. It is how third-world countries operate…the vote is what counts,” he said.

Van Drew is among the 31 Democrats who won in districts Trump won in 2016. These swing-district Democrats are feeling the heat from an onslaught of attack ads from GOP-aligned groups, and some have acknowledged their vote for impeachment could cost them their seat.

Van Drew was coy when asked if he’d making is party switch official at the White House ceremony, saying “we’ll see.” He said an announcement will come “very shortly” but not on Wednesday.

“Today is all about impeachment,” he said.