"Be safe," my dad texted me late Tuesday night.

"I’ll be fine," I dismissively wrote back, knowing I’d be inside the Capitol, one the safest places in the world.

Just before 11 a.m. Wednesday, I arrived at the Capitol, and all was calm and peaceful. I told my Uber driver to stay safe and went to work.

"It feels like a brand new day," Sen. Chuck Schumer, D-N.Y., gushed at a press conference in the Capitol shortly before noon. Schumer was celebrating the Senate Democrats' victories in Georgia the previous night, which makes the Senate now even at 50-50, Republicans and Democrats.

I then went downstairs to the second floor outside the Senate chamber to find Republican senators to question about the results in Georgia and to watch the mahogany boxes holding the Electoral College certificates be paraded to the House chamber.

TOP DEMOCRAT REVEALS WHEN THE IMPEACHMENT VOTE WILL TAKE PLACE

After the boxes departed the Senate, a U.S. Capitol Police officer I know suggested I take a look out the West Front windows.

I scurried over and took a photo, thinking that those protesters looked a bit too close to the building. But it just didn’t register with me, because I figured the police would stop them before they got any closer.

Popping back upstairs, I was preparing to go into the Senate chamber when Fox News showed live images of the protesters breaching the West Front.

Supporters of President Donald Trump climb the west wall of the the U.S. Capitol on Wednesday, Jan. 6, 2021, in Washington. (AP Photo/Jose Luis Magana)

Still, I wasn’t concerned. It was unfathomable they would ever get remotely close to entering the building.

With a few Republicans planning to object to Arizona’s electoral slate, I knew the Senate would return to session any minute for debate.

Unlike the House chamber, you’re not allowed to have electronics in the Senate chamber, so I gathered my pen and pad to take notes during Senate Majority Leader Mitch McConnell's speech at the top.

The cameras in the Senate chamber are controlled by the Senate recording studio.

Reporting from inside the chamber allows you to grab color and describe small details you wouldn’t see on TV.

For instance, before the speeches began, I could overhear Sen. Mitt Romney, R-Utah, telling Sen. Rob Portman, R-Ohio, "That’s what’s going on right now … outside," as Romney showed Portman his phone screen. I didn’t know what exactly they were talking about, but I’m sure it was the situation outside the Capitol.

The debate eventually began. McConnell spoke, followed by Schumer. I left midway through Schumer’s speech to return to my office to type up my notes.

Then I get a text from the pool of Hill journalists that the protesters made it inside the Capitol. 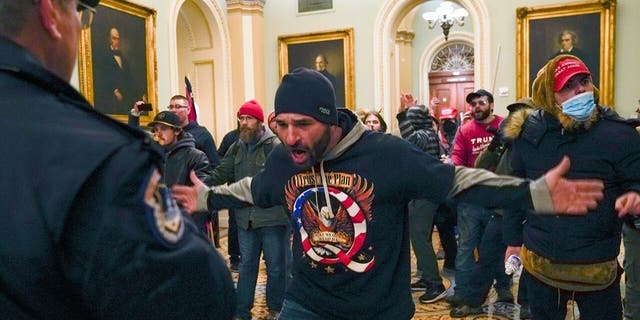 Trump supporters gesture to U.S. Capitol Police in the hallway outside of the Senate chamber after breaching the halls of the Capitol in Washington, Wednesday, Jan. 6, 2021. (AP Photo/Manuel Balce Ceneta)

I thought, O.K., a small handful got inside the building. No way the Capitol of the United States of America would be overrun by a violent mob.

Then the video feed from the Senate floor abruptly stopped.

A colleague from another network popped his head into my office asking if I saw what happened. "No," I replied, saying that it just went off.

A staffer was caught on a hot mic telling Senate President Pro Tempore Chuck Grassley, R-Iowa, who took over presiding for Vice President Mike Pence, "The protesters are in the building."

Our evacuation point was supposed to be the Senate chamber, but it was too late. We had to lock the doors and hunker down in our offices.

Soon after, a shelter-in-place announcement blared over the speakers.

I was worried about one of my colleagues who was reporting from inside the House chamber. A report of a gunshot frightened all of us.

Thankfully, another coworker, Kelly Phares, and I knew our other colleague was O.K. because she texted us while continuing to report the news in real time that the violent mob was trying to break down the House chamber doors.

Thanks to heroic colleagues like her, we began to see images of what was happening inside the building. It was mind-boggling. The Capitol had been overrun by insurrectionists. 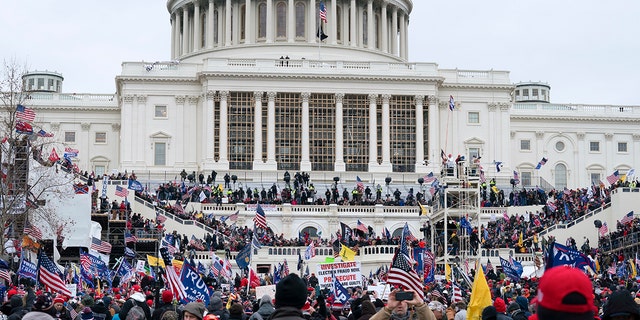 Seeing images of smoke bombs going off in the Ohio Clock Corridor outside the Senate chamber, rioters on the floor of the Senate and clashes in the Capitol Rotunda, we suddenly heard a loud commotion. The mob was downstairs.

I told Phares and another coworker, Jared Halpern, to pack up everything they needed in case we needed to make a run for it.

I didn’t want to scare them, but I later told them that night I had planned an escape route if we needed it. Thankfully, the rioters never found us.

Soon after, Capitol Police evacuated us to an "undisclosed location." We were safe next door to the room where all the senators and their staff were located.

But I will never forget the walk to the undisclosed location, the smell of pepper spray and tear gas outside the Chamber, and seeing garbage and debris strewn on the floor.

As we got to the Capitol basement, the smell was even worse and made it difficult to breathe. At the evacuation site, scores of FBI officers were there protecting us. I felt safe again.

I can’t even imagine what my journalist colleagues in the House chamber or Capitol Rotunda went through. They are brave and heroic, dedicated to showing the world what went on inside the Capitol.

One congressional aide barricaded alone inside his Capitol office described to reporters how rioters tried and failed to break down his locked door for 20 minutes.

My phone constantly buzzed with worried friends asking if I was O.K. I definitely should have texted my dad back sooner, but you lose all sense of time in the moment. Plus, I still had to report on the story.

Some senators would occasionally walk past us. I had to keep reporting.

But when I tried asking Sen. Ted Cruz, R-Texas, if President Trump’s rhetoric caused what happened today, he ignored me. Sen. Tommy Tuberville, R-Ala., ignored me as well. These were two of the senators leading the charge to object to Electoral College certification.

After about two-and-a-half hours, police escorted everyone – as well as the mahogany Electoral College boxes – back to the Capitol. 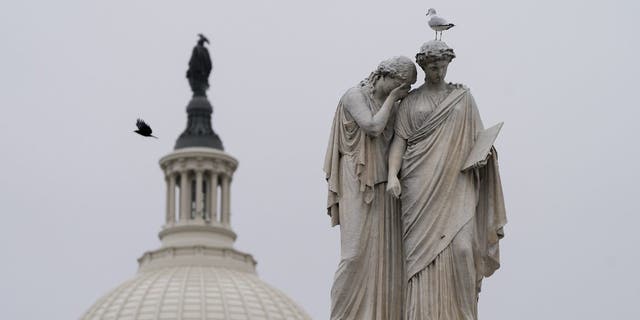 They told us not to touch anything because pepper spray and tear gas residue blanketed the halls of Congress. It covered everything: floors, railings, statues, walls, and more. There were also broken glass, furniture and garbage strewn about inside the Capitol.

The Senate and House eventually retuned to session, and I continued to work interviewing senators and shouting questions at Pence, who ignored them.

I caught Speaker Nancy Pelosi leaving the House floor and asked her what she was thinking now that this day was finally over.

Pelosi, who looked absolutely exhausted, replied it was almost 4 a.m. and said she didn’t want to do any interviews.

I didn’t blame her. We just survived an insurrection. I was exhausted, too.