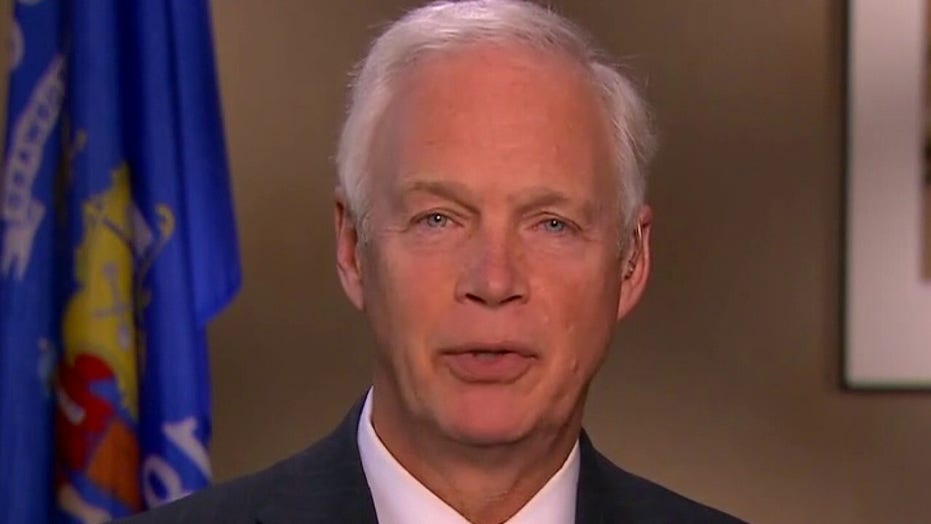 Sen. Johnson on the biggest question of the Russia probe: 'Who knew what and when?'

Republican Sen. Ron Johnson gives an update on efforts to uncover the truth on the origins of the Russia investigation.

Sen. Ron Johnson, R-Wisc., is hitting back against a scathing op-ed in the Washington Post by Sen. Richard Blumenthal, D-Conn., arguing that he never received documents relating to Joe Biden’s family nor did the CIA refuse to brief him on the matter.

In a lengthy thread on Twitter, Johnson denied Blumenthal’s claims that he received documents relating to Joe Biden and his son's activities in Ukraine from the son of a former Soviet intelligence agent and blasted the Connecticut Democrat for his “twisting of classified briefings and repeating of false news reports.”

“[Blumenthal’s] twisting of classified briefings and repeating of false news reports is beyond the pale,” Johnson tweeted. “It is a flat-out lie that I received the documents from Ukrainians that Democrats keep claiming. And they know it. It is unconscionable that Democrats and the press continue to report it.”

Johnson’s Twitter screed continued: “It is a flat-out lie that I asked for the CIA to brief our committee and that they refused. We’ve already been briefed repeatedly on these issues, Democrats simply didn’t like what they heard.”

In his op-ed on Friday, Blumenthal suggested that Johnson, the chairman of the Homeland Security and Governmental Affairs Committee, may be using Russian disinformation to move ahead with his investigation into Biden’s family. Blumenthal cites a report from last week that says Johnson had been provided with tapes by Andrii Derkach, a Ukrainian lawmaker whose father was a KGB agent.

Derkach has been active in leveling unsubstantiated corruption allegations against Biden and his son Hunter, who used to sit on the board of Burisma, a Ukrainian natural gas company. That effort has included publicizing leaked phone calls.

“Johnson’s actions are of such concern to the CIA, according to news reports, that the agency has refused to brief him,” Blumenthal wrote. “Think of it: Congress may become a forum for debunked conspiracy theories peddled by Kremlin proxies.”

He added: “There is no excuse for perpetuating Russian disinformation in the U.S. Senate, just as there is no excuse for barring the American public from learning more about the genuine foreign threats to the November election. The Trump administration appears to be failing to take the danger seriously, failing to prepare adequately.”

The senatorial spat comes just days after the U.S. counterintelligence chief said that officials believe that Russia is using a variety of measures to denigrate Biden ahead of the November election and that individuals linked to the Kremlin are boosting Trump’s reelection bid.

The statement Friday from William Evanina is believed to be the most pointed declaration by the U.S. intelligence community linking the Kremlin to efforts to get Trump reelected — a sensitive subject for a president who has rejected intelligence agency assessments that Russia tried to help him in 2016. It also connects Moscow’s disapproval of Biden to his role as vice president in shaping Obama administration policies supporting Ukraine, an important U.S. ally, and opposing Russian leader Vladimir Putin.

Asked about the intelligence assessment Friday evening in Bedminster, New Jersey, Trump appeared to dispute the idea that Russia was disparaging Biden. “I think the last person Russia wants to see in office is Donald Trump because nobody has been tougher on Russia than I have — ever,” he said.

Concerns about election interference are especially acute following a wide-ranging effort by Russia to meddle in the 2016 election on Trump’s behalf through both the hacking of Democratic emails and a covert social media campaign aimed at sowing discord among U.S. voters. Trump has routinely resisted the idea that the Kremlin favored him in 2016, but the intelligence assessment released Friday indicates that unnamed Kremlin-linked actors are again working to boost his candidacy on social media and Russian television.

The White House reacted to Friday’s news with a statement saying “the United States will not tolerate foreign interference in our electoral processes and will respond to malicious foreign threats that target our democratic institutions.”

Tony Blinken, a senior adviser to Biden’s campaign, responded that Trump “has publicly and repeatedly invited, emboldened, and even tried to coerce foreign interference in American elections. … Joe Biden, on the other hand, has led the fight against foreign interference for years.”

Democrats in Congress who have participated in recent classified briefings on election interference have expressed alarm at what they have heard. They have urged the U.S. intelligence community to make public some of their concerns in part to avoid a repeat of 2016, when Obama administration officials were seen as slow and overly deliberate in their public discussion of active Russian measures in that year’s election.