What is driving people in the Lone Star State to the polls? Reaction from Rep. Lance Gooden.

Early voting in Texas has stirred hope among Democrats of gaining ground in the state that has been in the firm grip of Republicans for decades.

Data released Wednesday from the Cook Political Report, showed that Texas has shifted from “Leans Republican” to “Toss Up,” – figures that align with takeaways from the 2018 Senate race, in which Republican Sen. Ted Cruz narrowly defeated Democratic Rep. Beto O’Rourke at 51% to 48%. 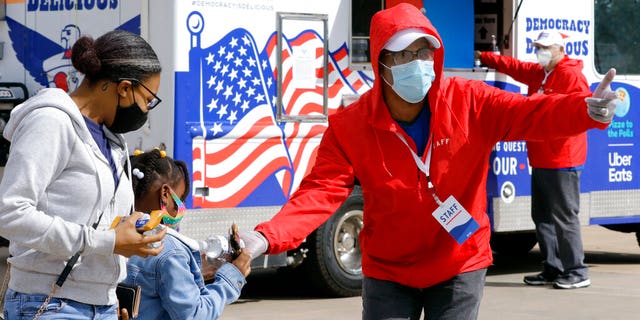 A staff member distributes water and snacks in front of the Democracy is Delicious food truck, powered by Pizza to the Polls and Uber Eats, Thursday, Oct. 29, 2020 in Houston. (AP Images for Pizza to the Polls)

The Texas Tribune reported Thursday that nearly 8.6 million Texans – more than have of the state’s registered voters – have already cast their ballot. That number represents roughly 95% of the entire vote in Texas in 2016.

The surge in voting is driven primarily by demographics like unmarried women and Latinos that tend to vote democratic and did not participate in the 2016 election.

Despite liberal enclaves like Dallas or San Antonio, Texas has for decades given the nation firmly conservative politicians like former President George W. Bush and U.S. Energy Secretary Rick Perry. But a surge of immigrants and younger voters participating in the election is shifting the pulse of the Lone Star State.

Still, others remain more cautious, given that Democratic voters are more likely to be wary of the coronavirus and vote early to avoid the crowds on Nov. 3.

“I think until we see what the actual Election Day numbers look like, it’s not clear whether or how much this is going to carry through,” Jim Henson, a University of Texas professor, told Bloomberg.

A Biden victory in Texas would rely heavily on the Hispanic vote, which accounts for about 30% of all eligible voters in Texas and are participating at twice the numbers they were in 2016.

“In Texas, the Latino vote has tended to lean Democratic, but that’s exactly it: It leans Democratic,” Renée Cross, senior director at the Hobby School of Public Affairs at the University of Houston, told the outlet. “I don’t think there’s any doubt that the majority of Hispanics will vote for Biden, but the question is how many of the ones who vote Republican will vote for Trump.”