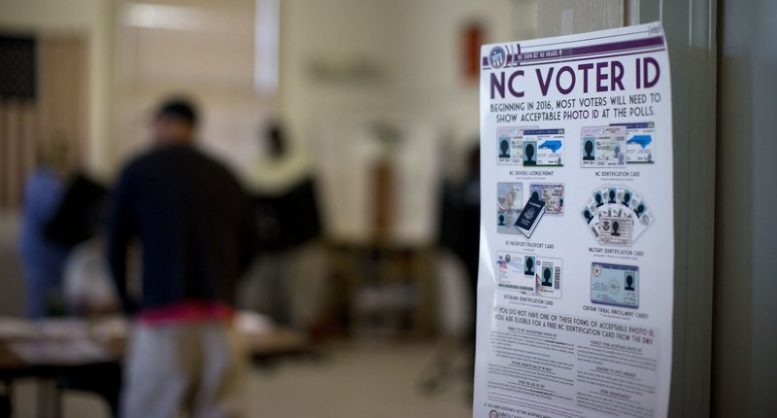 File- This photo shows a NC Voter ID rules posted at the door of the voting station at the Alamance Fire Station in Greensboro, N.C. (Andrew Krech/News & Record via AP)

A North Carolina appeals court has blocked a voter ID law, which was scheduled to take effect during this years general elections. A three judge panel unanimously made the decision Tuesday after claiming the law was enacted with discriminatory intent.

This comes amid an over years-long battle between Democrats and Republicans in the state to pass some form of voter ID laws. The state passed a more stringent voter ID bill in 2013, but it was shot down by the state’s courts due to similar concerns over discrimination.

The most recent law was passed by North Carolina voters in November 2018. The rule was blocked by a state court for the 2020 primary elections last July. At the time, however, it still had the green-light to be implemented during the generals.

Many left-wing activists have argued the rules would disproportionately target minority voters who may find it more difficult to to obtain state sanctioned forms of ID.

“Illegal voter ID bill; the latest bad faith attempt in a string of failed efforts by the North Carolina General Assembly to impede the right to vote of African Americans and Latinos in this state,” stated Rev. Dr. T. Anthony Spearman, President of the North Carolina’s NAACP.

However, many Republicans have argued the laws are necessary to protect electoral integrity.

Republicans have also said the bill is considered lenient compared to how strict voter ID laws can be. This new legislation allows for exemptions, which makes it possible to obtain state sanctioned IDs for free and would allow people to fill out provisional ballots if they do not have a photo ID on them at the time they cast their vote.

State Republicans have not yet said whether they plan on challenging the ruling in court.

RELATED: Joe Biden keeps telling voters to ‘go vote for someone else,’ raises concerns of his electability