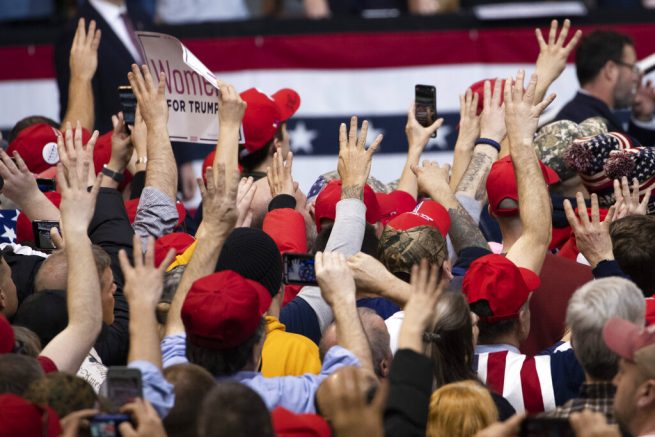 The president spoke with his supporters on Monday night, just hours before polls opened for the first-in-the-nation primaries. He acknowledged his Democrat competitors are also in the state trying to rally support, but said he believes the turnout at his rally was significantly larger than any of the other candidates.

Attendees waited in long lines for a chance to see the president speak during this crucial election year, with some camping out over night. Other supporters, even those who have not traditionally voted Republican in the past, said they were inclined to attend the rally since the Democrat Party is going “too far left” on the political spectrum.

“I’ve actually always been independent, I’ve not registered either way, but lately he’s doing the job,” said New Hampshire voter Dave Dussault. “And I think that there’s a lot of the independent folks that are going to be leaning his way, particularly if the Democrats are leaning so far to the left like they seem to be in the media.”

During the rally, the president touted the booming economy and assured he plans to “keep it that way.” He went on to highlight the growth of the U.S. military’s power, improved trade agreements, increased exports of American made goods and followed-up by slamming Democrats for advocating for open borders.

The president then addressed the public outrage over Nancy Pelosi’s handling of his State of the Union address last week, where she ripped up a copy of his speech live on television.

President Trump also made sure to address the global concern over the deadly coronavirus. He assured all patients with confirmed cases of the virus are recovering, quarantined and getting better. His comments come after the CDC reported coronavirus has a low public health risk in the U.S. However, health officials confirmed the 13th case of the virus in San Diego on Monday.

After the rally, President Trump traveled back to Washington, D.C. to gear up for another busy day at the White House.