Conservative activist Nick Fuentes fired back at Nikki Haley, Meghan McCain and other critics Saturday, after they slammed Fuentes for confronting writer Ben Shapiro on Friday while Shapiro was walking by with his wife and children.

The Friday incident in Florida, near the site of the Turning Point USA conference where President Trump spoke Saturday, also drew comments from Megyn Kelly, Michael Avenatti and Sebastian Gorka, among others.

But on Saturday, the 21-year-old Fuentes, host of the “America First” podcast, was unapologetic in his response.

BEN SHAPIRO ON HOUSE DEMOCRATS' REACTION TO IMPEACHMENT VOTE: LIKE 'A NEW HUSBAND ON HIS WEDDING NIGHT'

“It’s great to see the four most dishonest media hacks in contemporary politics put aside their differences and come together in defense of civility… yea that or maybe there’s an ulterior motive here. I see four never Trumpers that have an axe to grind with American First.”

Fuentes was outside, talking with conservative writer Andy Ngo and a small group of others when the Shapiro family walked past them. Fuentes spotted Shapiro and walked toward him.

“Why did you give a 45-minute speech about me at Stanford, and you won’t even look in my direction?” Fuentes is heard shouting at Sharpiro in the video. “C’mon, I’m right here … ”

Shapiro continues to walk away without acknowledging Fuentes.

“Wow, well, that’s our free speech for you, everybody,” Fuentes says to the onlookers.

“I guess Ben Shapiro is only against the use of human shields when the Palestinians do it,” Fuentes wrote on Twitter.

Fuentes wrote in another tweet: “Ben Shapiro gave a 45 minute speech defaming me as a Neo Nazi trying to destroy my reputation, and that’s okay, but when I call him out in the presence of his family, incidentally, well that’s just not civil! Oh please, you neocons have blood on your hands let’s stop pretending.” 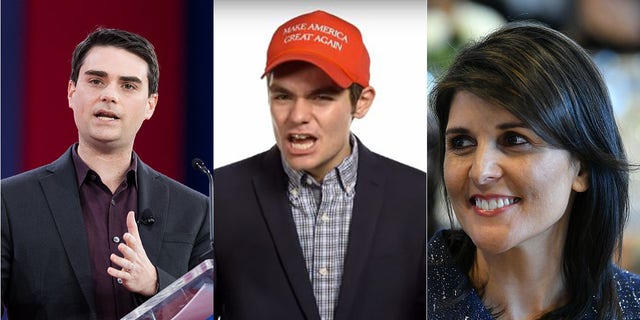 A video showing Ben Shapiro, left, being confronted by Nick Fuentes, center, drew reactions from Nikki Haley and others this weekend.

Responding to the video Saturday, Haley wrote that if Fuentes had a beef with Shapiro, he chose the wrong way to express it.

“This is a perfect example of what NOT to do unless you just are trying to get attention,” Haley wrote. “Confronting someone with their kids and family with cameras is wrong on every level. Do better next time. There are better ways to get your point across. This wasn’t it.”

“Another lying, Never Trump, neocon lecturing me about decorum,” Fuentes wrote. “Almost everything about you and what you stand for is a lesson in ‘what NOT to do’ for decent people. Pusihing more deadly WARS in the Mid-East based on LIES is wrong on every level, actually—way worse than my words!”

Fuentes added in another tweet: “Remember when Nikki Haley said that Donald Trump inspired the Dylan Roof massacre in South Carolina? I remember. Everyone making such a big deal out of this just happens to have a long record of being a disgusting fake conservative liar, must be a coincidence. Be better Nimrata!” (Nimrata is Haley’s first name.)

Previously, others weighed in on the Fuentes confrontation with Shapiro.

“Not only is this sick but it accomplished absolutely nothing except possibly traumatizing @benshapiro’s children,” “The View” co-host Meghan McCain wrote. “He’s walking with his pregnant wife and kids – accosting them like this is repulsive.

“@benshapiro handling himself beautifully despite nasty provocation in front of his children,” journalist Megyn Kelly wrote. “Not easy to maintain one’s dignity while under this kind of attack but as usual Ben manages it.”

“I’m no fan of @benshapiro as everuone knows,” Michael Avenatti wrote. “But @NickJFuentes – you are a PUNK. You don’t confront a man in public when he is with his family and young kids. You are very fortunate your stunt ended the way it did.”

Added Sebastian Gorka: “This @nickfuentes git is more pathetic than the most snowflakey (snowflake).”

But some commenters backed Fuentes.

“I have watched @benshapiro for years,” wrote Joshua Foxworth, a Marine Corps veteran running for Congress in Texas. “He has a consistent pattern of using his platform to attack opponents and then if those opponents dare to defend themselves, they are slandered for being unprofessional. He and allies did this with @realDonaldTrump.”

On Saturday evening, photos and video posted on social media showed Fuentes being detained by police outside the Turning Point USA conference site. In one video, onlookers chant “America First!” as Fuentes talks with police.

Inside the hall, Shapiro appeared to be addressing the confrontation in remarks to the audience, according to a video posted online.

“There are certain conversations that are just not worth it,” Shapiro says, “as we have noticed recently.”