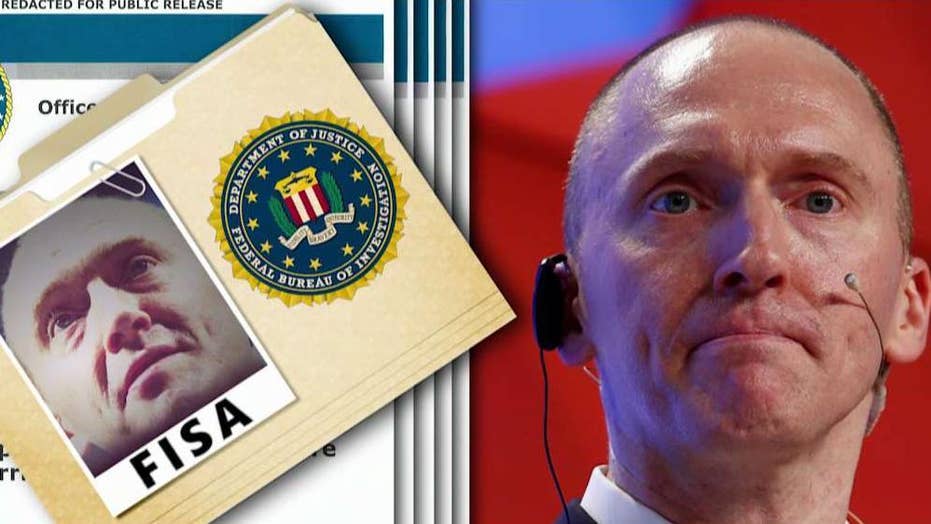 Michael Horowitz investigated the origins of the FBI probe into Russian interference in the 2016 election and the subsequent surveillance of the Trump presidential campaign; David Spunt reports.

They also criticized the IG for including previously redacted “negative information about Christopher Steele” without giving them an opportunity to review, while saying their client "gave extensive testimony in person and by Skype" for the investigation.

Horowitz’s report, which found there was no political bias in the launch of the FBI’s Trump-Russia probe or in the applications for FISA warrants against Page, did find, however, that there were “significant inaccuracies and omissions” in those applications — specifically related to Steele’s reporting.

One error in the FISA application was the inclusion of a “source characterization statement asserting that Steele’s prior reporting had been ‘corroborated and used in criminal proceedings,’ which overstated the significance of Steele’s past reporting and was not approved by Steele’s handling agent.”

But Steele’s attorneys, who also represent Orbis Business Intelligence where Steele worked, fired back, complaining they were “never given an opportunity to respond to the claims” regarding the sub-source.

The attorneys also sought to clarify who Steele was working for — noting that his election reports were “gathered and written for a private client, Fusion GPS.” The work was funded by the Democratic Party and Hillary Clinton campaign.

The lawyers said Fusion “consented” to “voluntarily sharing the reports with the FBI,” but rejected assertions that he was a confidential source for the bureau.

Steele “was never a Confidential Human Source for the FBI with respect to any matter,” the attorneys said. Weinberg and Shiffrin said the FBI first engaged with their client in 2013 to conduct investigations on the FBI’s behalf, but Orbis and Steele stressed he could not be a CHS "because his obligations to his former government employer prohibited his acting in such a capacity." They said Steele insisted on a basic "contractual relationship."

The FBI ultimately cut ties with Steele for an “unauthorized disclosure to the media of his relationship with the FBI,” but his lawyers defended his contacts and said the bureau “never asked” him “not to disclose information to the media.”

The IG report, though, has exposed Steele to even more scrutiny over his unverified dossier. As his lawyers were putting out their statement, Attorney General Bill Barr called the dossier a "sham" during a forum in Washington, D.C.

Meanwhile, the inspector general report found that not only did Steele’s research surrounding the 2016 presidential election provide much of the information used in Page’s FISA warrant application and renewals, but the FBI did not have specific information corroborating allegations against Page from Steele’s reporting.

"We determined that prior to and during the pendency of the FISAs the FBI was unable to corroborate any of the specific substantive allegations against Carter Page contained in the election reporting and relied on in the FISA applications, and was only able to confirm the accuracy of a limited number of circumstantial facts, most of which were in the public domain," the report said, noting that the information confirmed was only timing of events and dates when Page traveled to Russia.

In addition to the lack of corroboration, the inspector general found that the FBI's interviews of Steele and his sub-sources "revealed potentially serious problems with Steele’s description of information in his election reports." The report stated that the FBI "failed to notify" the Office of Investigations (OI), which was working on the Page FISA applications, "of the potentially serious problems identified with Steele's election reporting that arose as early as January 2017."

Horowitz added that "even as the FBI developed this information, we found no evidence that the Crossfire Hurricane team reconsidered its reliance on the Steele reporting in the FISA renewal applications."