MANCHESTER, N.H. – A new poll in New Hampshire — the state that holds the first primary in the race for the White House — indicates an airtight contest among South Bend Mayor Pete Buttigieg, former Vice President Joe Biden, and Sen. Bernie Sanders of Vermont.

And the MassINC Polling Group survey for WBUR released Wednesday also points to a deterioration of support for another top-tier contender for the Democratic presidential nomination – Sen. Elizabeth Warren of Massachusetts.

Buttigieg, a one-time longshot who’s soared in polls in Iowa and New Hampshire this autumn, stands at 18 percent among those likely to vote in the Granite State’s Feb. 11 Democratic presidential primary, with Biden at 17 percent and Sanders at 15 percent. Taking into account the survey’s margin of error of plus or minus 4.7 percentage points, the three candidates are basically all tied up for the top spot. 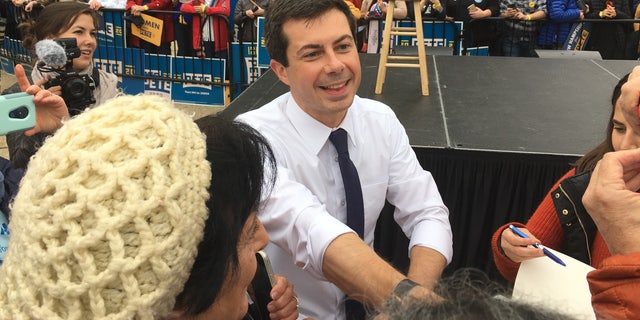 "What's remarkable about this is how close it remains," MassINC president Steve Koczela noted. “We've got three candidates, all within three points of each other — and Elizabeth Warren not that far behind, right there in that top tier.”

Koczela emphasized that the race for the New Hampshire primary “could go in any direction."

Warren – who like Sanders hails from a neighboring state to New Hampshire – stands at 12 percent in the poll. Since this is the first time the pollsters put out a survey this cycle in the New Hampshire presidential primary, no direct comparisons can be made. But her standing in the new poll is in line with her support in other surveys the past month in the New Hampshire primary. Warren registered from the upper teens to around 30 percent in most Granite State polling conducted from September through early November.

Warren has also seen her standing in the polls in Iowa and nationally deteriorate over the past month. The drop came after increased scrutiny of Warren's plans to pay for and implement a government-run, "Medicare-for-all." The populist senator continued to swear off raising middle-class taxes to pay for the high price tag attached to the single-payer health care system (roughly $20 trillion in new spending over a decade). And she broke with fellow progressive champion and 2020 rival Sanders — who wrote the "Medicare-for-all" bill in the Senate — over implementation. Warren's transition play would delay the immediate end of privately held insurance.

Rep. Tulsi Gabbard of Hawaii and tech entrepreneur Andrew Yang – who’ve both spent a lot of time meeting voters in New Hampshire – each register at 5 percent in the poll.

Sen. Amy Klobuchar of Minnesota and billionaire environmental and progressive activist Tom Steyer each stand at 3 percent, with former New York City mayor and multi-billionaire media mogul Mike Bloomberg at 2 percent. Bloomberg – who jumped into the race late last month – is skipping Iowa, New Hampshire, Nevada, and South Carolina, the first four states to hold contests in the presidential nominating calendar. Instead, he’s campaigning in the delegate-rich states that vote on Super Tuesday in early March, and beyond.

Sen. Cory Booker of New Jersey and best-selling spiritual author Marianne Williamson are each at 1 percent in the survey, with everyone else in the still large field of Democratic White House hopefuls registering less than 1 percent. That includes former Massachusetts Gov. Deval Patrick, who last month declared his candidacy.