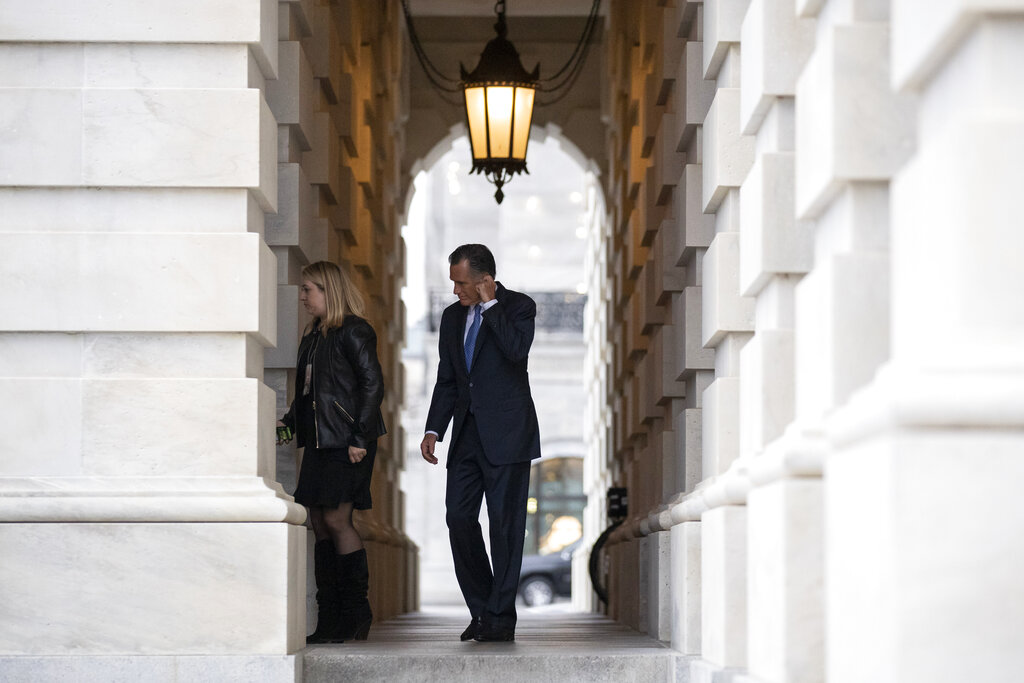 Utah Sen. Mitt Romney is facing extreme blowback for his vote to convict President Trump in the Senate impeachment trial. Earlier on Wednesday, he alleged President Trump committed abuse of power to stay in office.

“The grave question the Constitution tasked senators to answer is whether the president committed an act so extreme and egregious that it rises to the level of a high crime and misdemeanor,” stated Romney. “Yes, he did.”

However, he chose to vote against the obstruction charge, the second article of impeachment against President Trump.

The senator announced his decision on the Senate floor ahead of the full chamber vote. He said he feared his place in history, his oath to God and the Constitution more than he feared the wrath of the Republican Party. The failed presidential nominee also acknowledged the possibility of being a GOP pariah after his decision.

“I’m aware that there are people in my party and in my state who will strenuously disapprove of my decision, and in some quarters I will be vehemently denounced. I’m sure to hear abuse from the president and his supporters. Does anyone seriously believe that I would consent to these consequences other than from an inescapable conviction that my oath, before God, demanded of me?” 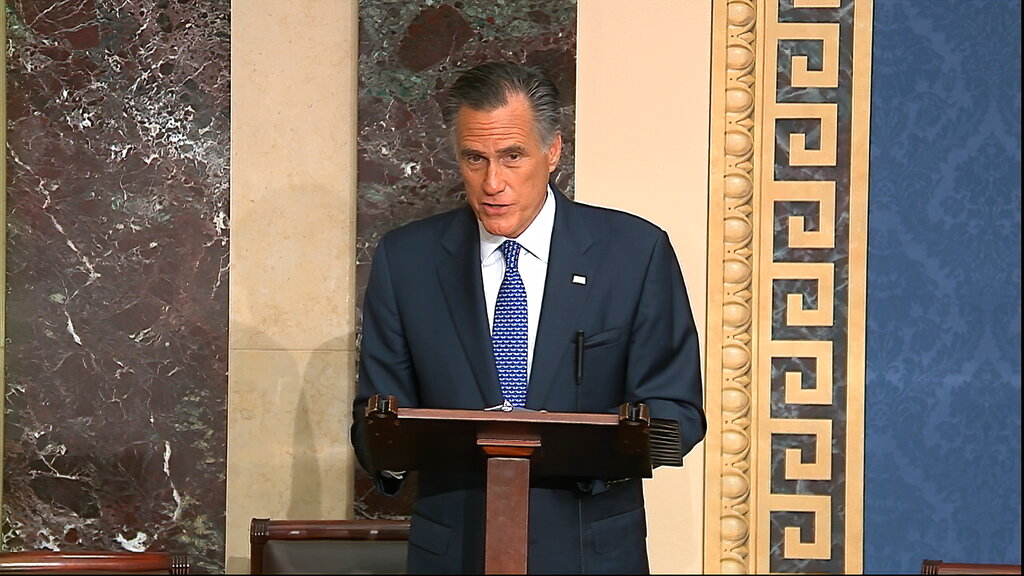 In this image from video, Sen. Mitt Romney, R-Utah, speaks on the Senate floor about the impeachment trial against President Donald Trump at the U.S. Capitol in Washington, Wednesday, Feb. 5, 2020. (Senate Television via AP)

Sen. Romney was right. Those closest to the president immediately called him out on Twitter.

Donald Trump Jr. said the senator was “forever bitter that he will never be president” and recommended his expulsion from the GOP.

Congressman Lee Zeldin weighed in, saying Romney “absolutely despises that Donald Trump was elected president” and he was not. He went on to say his “sore loser mentality launched this sham impeachment.”

RNC Chairwoman Ronna McDaniel criticized Romney’s vote on Twitter. She said this isn’t the first time she has disagreed with Romney and suggested their tensions may deepen going forward.

She added the president did nothing wrong and the GOP was largely united in his defense. 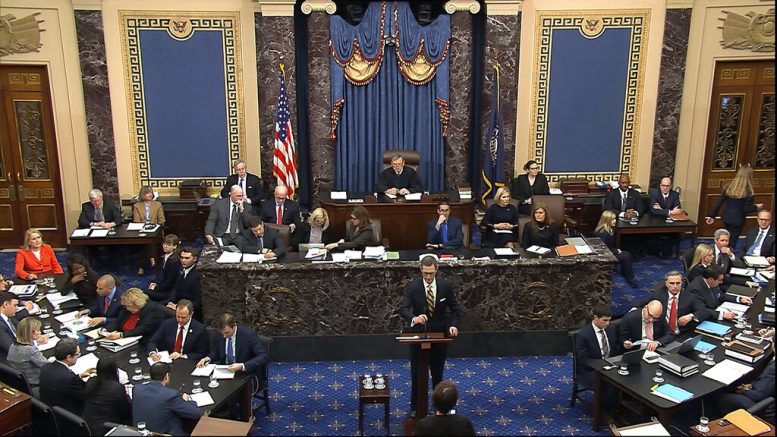 In this image from video, White House deputy counsel Patrick Philbin speaks during the impeachment trial against President Donald Trump in the Senate at the U.S. Capitol in Washington, Tuesday, Jan. 28, 2020. (Senate Television via AP)

President Trump’s impeachment team set up their final defense in the impeachment trial. The defense team wrapped up their opening arguments Tuesday, giving their last uninterrupted remarks against the pair of articles. They emphasized the articles don’t hold merit and don’t match what the framers of the Constitution envisioned.

“And what we see in the House managers charges and their definition of abuse of power is exactly antithetical to the framers approach because their very premise for their abuse of power charge is that it is entirely based on subjective motive, not object of standards, not predefined offenses,” explained White House deputy counsel Patrick Philbin.

The defense team also stressed the political gravity of removing the president under these charges, pointing out that it would set a “dangerous” precedent. They said it would overturn the last election as well as interfere with the upcoming 2020 election.

“What they are asking you to do is to throw out a successful president on the eve of an election with no basis and in violation of the Constitution,” said White House counsel Pat Cipollone. “It would dangerously change our country and weaken, weaken forever, all of our democratic institutions.” 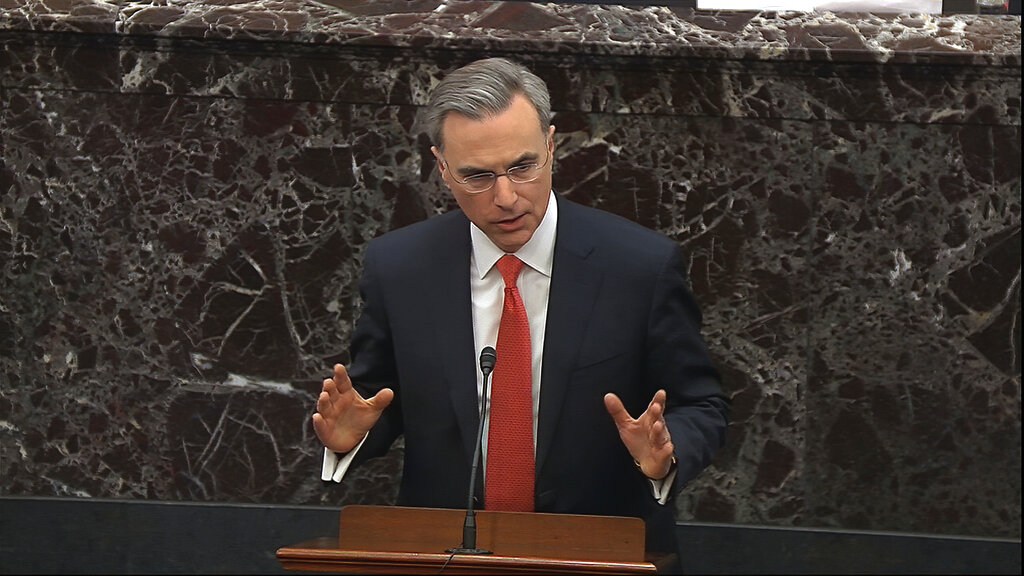 In this image from video, White House counsel Pat Cipollone speaks during the impeachment trial against President Donald Trump in the Senate at the U.S. Capitol in Washington, Tuesday, Jan. 28, 2020. (Senate Television via AP)

“I never told John Bolton that the aid to Ukraine was tied to investigations into Democrats, including the Bidens. In fact, he never complained about this at the time of his very public termination. If John Bolton said this, it was only to sell a book.”

Officials are expected to vote Friday on whether to call witnesses or produce more documents. 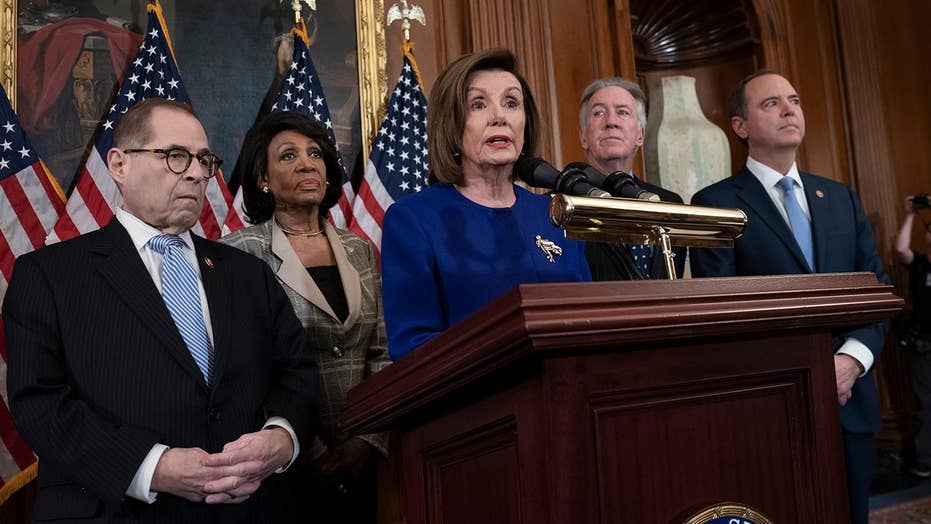 Former President Bill Clinton, the only living American president to have gone through the same process, weighed in Tuesday on House Democrats' bid to impeach President Trump — saying lawmakers are doing “what they believe is right.”

“They’re doing their job as they see it and we should wait to see it unfold,” Clinton told Fox News while touring a Clinton Foundation program in New York City. “And the rest of us should go about our jobs and do them as we see it.”

House Democrats on Tuesday announced two articles of impeachment against Trump, accusing him of abuse of power and obstruction of Congress over his interactions with Ukraine.

Clinton was impeached in 1998 for perjury and obstruction of justice related to the Paula Jones and Monica Lewinsky controversies but was acquitted in the Senate.

Elaborating to a gaggle of reporters, Clinton said: “Congress is doing what they believe is right.” He made the comments at New York City’s Edwards A. Reynolds West Side High School.

Speaking of his wife, 2016 Democratic presidential candidate Hillary Clinton, the former president said, “You know my candidate didn’t win. I think it was a big mistake for America. But that’s how the Electoral College works so now we’re going forward.”