A left-wing activist charged for his alleged participation in the Capitol Hill riot maintains control of his Twitter and YouTube accounts, Fox News has learned.

John Sullivan, 26, recorded an up-close video of a woman’s fatal shooting during the Jan. 6 Capitol siege and can allegedly be heard egging on protesters in a video he shared on his YouTube and Twitter accounts under the pseudonym Jayden X.

Sullivan is accused of taking part and encouraging rioters as they swept through the building. He allegedly wore a gas mask and had a knife at the time of the siege, court papers show. He can be heard telling rioters that "We got to get this s— burned," and "it’s our house m————," according to an affidavit signed by FBI Special Agent Matthew Foulger.

As protesters climbed over a wall near the Capitol entrance, Sullivan allegedly exclaimed in the video, "You guys are f—— savage. Let’s go! This s— is ours! F– yeah. I can’t believe this is reality."

In another video, Sullivan can allegedly be heard cheering on the crowd as they broke through the final barricade before the Capitol saying: "We did this together. … We are all a part of history." 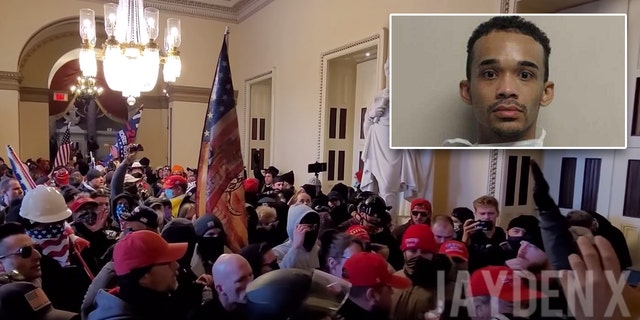 The mayhem left at least five people dead, including the woman whose death Sullivan filmed, and a Capitol Police officer.

Sullivan faces federal charges of civil disorder, entering a restricted building and violent entry or disorderly conduct, but was released without bail over the weekend.

While Sullivan is required by law to stay off social media, surrender his passport, and remain on house arrest, his social media accounts remain active and accessible.

Twitter sparked major controversy earlier this month with its decision to ban President Trump from its platform, citing a risk of "further incitement" following the violence that overtook Capitol Hill. The tech giant has come under fire, however, for the glaring exceptions they appear to have made for some of the world's most hateful and dangerous voices, notably Iran's supreme leader, Ayatollah Ali Khamenei, and those belonging to China's Communist Party.

Sullivan's latest Twitter posts are focused almost exclusively on the aftermath of the Capitol chaos, with a recent one encouraging his 3,224 followers to "wreak some havoc." The activist previously told Fox News that he was at the Capitol siege only to "document" the events, and said he frequently attends and films protests.

Sullivan is the founder of a Utah-based group called Insurgence USA, but he has denied ties to Antifa or anti-fascists in recent interviews. His group Insurgence USA, however, had advertised an event called "Kick These Fascists out of DC" on Wednesday around the same time as a pro-Trump rally near the National Mall that preceded the Capitol riot.