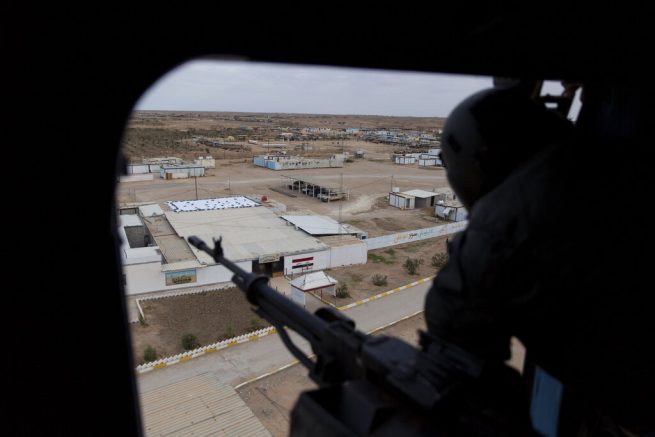 FILE – An Iraqi soldier mans a machine gun onboard an army helicopter that is passing over the border town of al-Qaim during military operations of the Iraqi Army’s Seventh Brigade, code named “Will of Victory,” in Anbar, Iraq. Troops from the U.S.-led coalition pulled out from a base in western Iraq on Thursday, March 19, 2020, as part of a planned drawdown, Iraqi and coalition officials said, while training activities by the coalition were suspended amid concerns about the coronavirus. (AP Photo/Nasser Nasser, File)

The anti-ISIS coalition in Iraq has continued to gradually withdrawal its troops from the country and hand over military facilities to Iraqi forces. Over the past few days, U.S. troops have left military bases near the cities of Kirkuk and Mosul. They are now on their way home.

However, officials have warned that although the Islamic State has been obliterated on the ground, its terror cells are still very much active.

“Intent of us leaving the base, strictly like I said before, long time coming in coordination with the government of Iraq,” stated Brig. Gen. Vincent Barker, anti-ISIS coalition, Iraq. “We’ve got about 500 soldiers who will be leaving with about a million dollars worth of equipment, but will be staying back.”

The withdrawal of U.S. troops is expected to save billions of taxpayer dollars and thousands of American lives as part of President Trump’s push to end foreign wars.

However, the Pentagon said it will be closely watching Iraq as the threats posed by ISIS remnants and Iranian-backed paramilitaries still remain. For instance, ISIS prisoners recently tried to take advantage of the coronavirus panic and escape from detention in Kurdish-held areas of Iraq.

For their part, the Ayatollah regime recently ramped up threats against U.S. interests after staging two attacks on U.S. troops this year.

“Today our most vicious enemy is the U.S. — we have many foes, but the one who is the most vicious is called the United States,”said Supreme Leader Ayatollah Ali Khamenei. “American authorities are liars, and they are rude and greedy.”

Despite this, Democrat lawmakers and the mainstream media are working to protect Iran by trying to ban President Trump from using military power against the Ayatollahs.

While the U.S. is pulling troops out of Iraq, some experts have warned Iran may boost its own presence there by disguising its emissaries as Iraqi self-defense forces. In this light, intelligence gathering and tight surveillance is crucial to prevent Iraq’s handover from the coalition to the Ayatollahs.

“U.S. Central Command is well postured to defend our forces around the region and to respond to any further aggression against our forces,” stated Gen. Kenneth MckKenzie Jr., commander – U.S. Central Command. “In fact, I have asked and the secretary has granted my request to continue to operate two aircraft carrier strike groups in the region.”

As of now, Pentagon officials are welcoming the cooperation and mutual trust they have established with their Iraqi counterparts. They have said Iraq now has every chance of becoming a stable and prosperous country without America’s direct involvement.