President-elect speaks on plan for administering COVID-19 vaccines to Americans from Wilmington, Del.

President-elect Joe Biden is taking aim at some Republican members of Congress who refused to wear masks while huddling in secure rooms last week during the storming of the Capitol.

"It was shocking to see members of the Congress while the Capitol was under siege by a deadly mob of thugs refuse to wear a mask while they were in secure locations," the president-elect said on Friday. Biden spoke as he unveiled what he called a "bold" plan to speed up the distribution of coronavirus vaccinations that he termed a "dismal failure" under President Trump’s administration.

Pointing a handful of GOP members of Congress who refused to put on masks offered by their Democratic colleagues as they and their staffs sheltered in a cramped, windowless room, Biden asked, "What the hell’s the matter with them?" 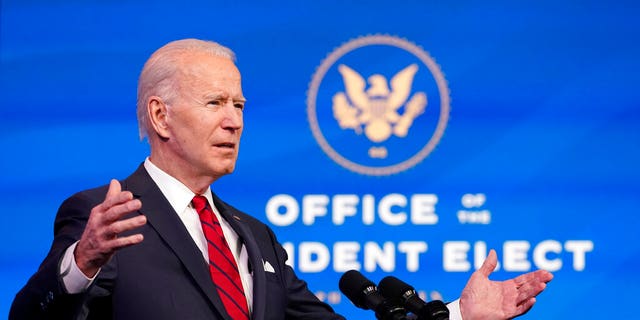 He added: "It’s time to grow up. The result – at least four members of Congress today – including a cancer survivor – now have COVID-19 who were in those rooms."

Members of Congress were quickly moved to secure rooms in the Capitol after the seat of the nation’s government was attacked in an insurrrection launched by right-wing extremists and other Trump supporters who were trying to disrupt congressional certification of Biden’s election victory.

In his speech, Biden reiterated his request for Americans to wear masks for the first 100 days of his administration, which begins next Wednesday as the president-elect is inaugurated. And Biden repeated that he’ll issue an executive order requiring masks for federal workers and on federal property, as well as for interstate travel on trains and planes.

"This is not a political issue," Biden said. "It’s about saving lives. I know it’s become a partisan issue, but what a stupid, stupid thing for it to happen. This is a patriotic act." And he said experts predict that mask-wearing over the next 100 days could prevent up to 50,000 deaths from the coronavirus by April.

The president-elect’s speech – which he gave in his hometown of Wilmington, Del., came new cases of the virus continue to surge across the country. Nearly 390,000 people in the U.S. have died of COVID since the pandemic swept the nation nearly a year ago. More than 23.4 million people in the U.S. have been infected with the virus since it first struck. And on Tuesday, more than 4,300 deaths nationally were linked to the virus, a new one-day high.