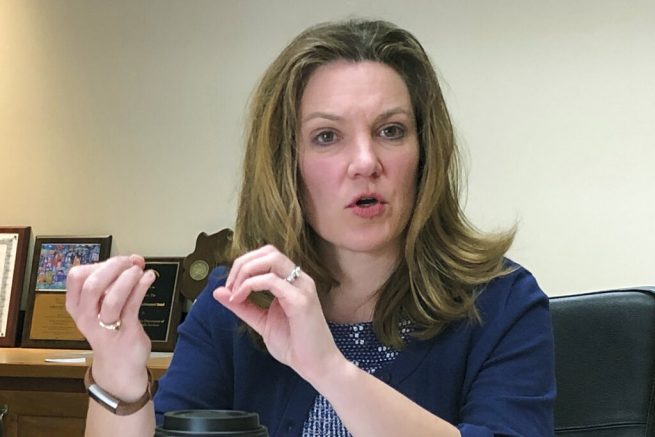 FILE – Andrea Palm, then Secretary-designee of the Wisconsin Department of Health Services, speaks during a meeting with reporters in Madison, Wis. Medicaid enrollment in Wisconsin is expected to increase dramatically due to the coronavirus pandemic, requiring the Legislature to take swift action to bolster the program that serves more than 1 million poor, elderly and disabled people, the state’s health secretary Andrea Palm warned legislative leaders in a letter, Tuesday March 31, 2020. (AP Photo/Scott Bauer)

Wisconsin’s’ primary elections are on track to take place this Tuesday despite growing concerns surrounding the coronavirus outbreak.

On Sunday, ten mayors and dozens of officials statewide called on Health Secretary Andrea Palm to “exercise her emergency powers” and cancel in-person voting on April 7.

Other officials, including state Gov. Tony Evers (D), are also urging lawmakers to allow a mail-only election in order to avoid a public health risk.

“I can’t do this or move this election or change it on my own, my hands are tied and that’s why I spoke to the legislative leaders about this weeks ago,” he stated. “I even publicly called on them to act…they have made it clear they are unwilling to change.”

This came after a federal judge allowed the election to go as scheduled, adding that he could only take into account citizen’s constitutional rights and not their safety. However, he did make some changes to the state’s primary process by extending the deadline to hand-in absentee ballots, but only through April 13.

In response, Gov. Evers held a special session where he strongly urged for its postponement as well as allowing voters to send in their ballots until May 26 because of the ongoing pandemic.

“I can’t ignore that municipal leaders from Green Bay to Milwaukee to Waukesha significantly condensed the number of polling locations available, creating a dangerous situation where voters, staff and volunteers will not be able to avoid large groups or practice social distancing when they go out to vote,” he explained. “This is a significant concern and a very unnecessary public health risk.” 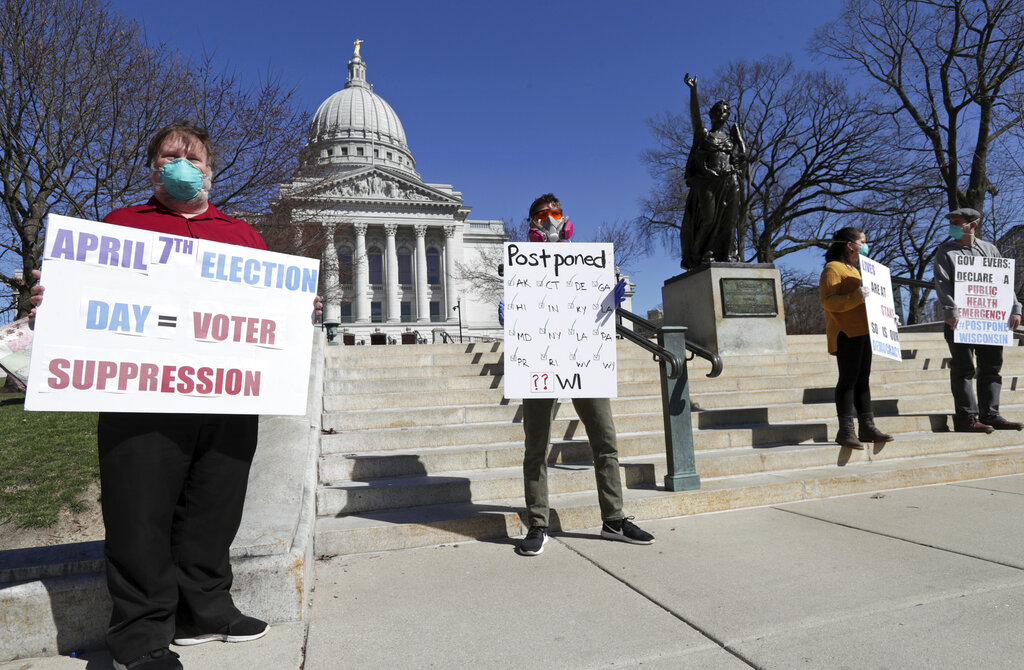 A group with C.O.V.I.D., Citizens Outraged Voters in Danger, including, from left, Ron Rosenberry Chase and Jim O’Donnell, protest while wearing masks outside the State Capitol during a special session regarding the spring election in Madison, Wis., Saturday, April 4, 2020. Wisconsin Republicans say they will ask the U.S. Supreme Court to block extended absentee voting in Tuesday’s primary, despite public health fears about in-person voting amid the coronavirus pandemic. (Amber Arnold/Wisconsin State Journal via AP)

However, state Republicans struck down Evers’ request to delay voting. They, instead, sent an emergency stay application asking the Supreme Court to cut the six-day extension for voters to send in their ballots, stating that it would damage “election integrity.”

“When it comes to the election process, we looked at everything, there is no good answer,” said Rep. Jim Steineke (R-Wis.). “Unfortunately, when the governor requested an all-mail-in ballot, he hadn’t checked with the elections commission to see if it was possible.”

State officials are now asking lawmakers to hold a special session before the primary elections and find a voting process that “protects both public health and the right to vote.” So far, at least 15 states have changed or postponed their primaries due to concerns over the coronavirus.