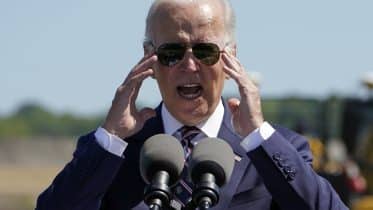 Once again, the Biden administration is trying to gaslight the American people into thinking their policies have improved America’s economy. The administration is touting their so-called Economic Blueprint. There, they claimed that the first two years of Biden’s term were two of the most productive in history.

The White House released a 58-page document on Friday. The document boasted both job and wage gains. It also mentioned the ‘bold and decisive action’ from the administration that comes as the country continues to recover from losses caused by lockdowns. Biden also claimed on Twitter that his first two years in office have ‘spurred the strongest economic recovery in recent history’.

“Our plan, powered by the Inflation Reduction Act, represents the largest investment in fighting climate change in our country’s history, and it will put us well on our way toward a future where we depend on the wind, the sun and other clean sources of energy,” Yellen said. “We will reduce ourselves from our current dependence on fossil fuels and the whims of autocrats like Putin.”

Despite these claims, Americans continue to feel the effects of historic inflation. However, the Biden administration said it has accomplished the greatest economic achievements in decades.

“The recent trifecta of legislation our administration has signed into law will strengthen the foundations of long-term growth at the core of our post-pandemic economy,” Yellen stated. “Our economy, continues to expand and is upgrading above levels that would have been predicted pre-pandemic. It’s fair to say by any traditional metric, we have experienced one of the quickest recoveries in our modern history.”

The administration says their blueprint is built on five ideas they claim will help American workers.

The first idea is to empower workers by expanding jobs and wages. The idea also plans on giving people the power to unionize. The second idea is to make and build in America by investing in infrastructure and innovation in so-called clean energy and buying in America. The third idea is to give families what they call breathing room by lowering costs and allowing greater access to prescription drugs as well as by creating more affordable healthcare and childcare. The next idea is increasing competitiveness in the American industry by opening up corporation control and raising up small businesses. The last idea is by rewarding working class Americans by reforming taxes to ensure that household tax on those making less than $400,000 a year are never raised.

The document was released as Biden was headed to Ohio. He visited the Buckeye State to oversee the ground breaking of a new manufacturing facility for intel, something the administration attributes to the passage of the CHIPS Act earlier this year.