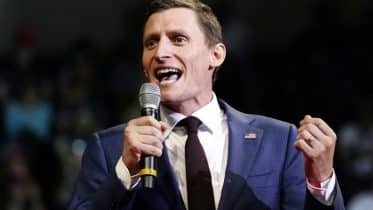 The Arizona Republican nominee for Senate told reporters his most effective pitch to voters is his pledge to secure his state’s border with Mexico in the last two months before the November election at the National Conservatism Conference held Sept. 11 through Sept. 13 in Miami at a press gaggle shortly after his speech to a closed-the-press reception for conference participants.

“It’s the wide-open southern border,” said Blake Masters, the former president of Thiel Capital, the private family investment vehicle for Peter Thiel’s family. “Which was a choice. Joe Biden made that choice.”

“Mark Kelly, my opponent in Arizona, he’s done more than anyone in the whole country to help Biden implement this disastrous open border policy, so you’ve got 500,000 actually about 300,000 illegals coming through every month,” he said. “Five million have come here since Joe Biden and Mark Kelly to open the Southern border.”

Masters said the open border not only brings in illegal migrants, but also dangerous drugs.

“It’s all the fentanyl, it’s the drug overdoses. It’s the crime attendant to that open border,” said the married father of three.

The border and crime are also connected to how Democrats have handled the nation’s economy.

“It’s law and order–crime. It’s also inflation of course, and inflation is an abstract economic term,” he said.

“What it really means is the Democrats have made life too expensive,” said the 36-year-old Denver native.

“They’ve made life unaffordable for so many people, uh, at the gas pump at the grocery store,” Masters said. “Everything you need to live is more expensive because of Joe Biden and Mark Kelly’s demented economic policies.”

The man who co-wrote the book “Zero to One” with his former boss Peter Thiel, said he has concerns about how the 2022 election is conducted, after the mismanagement of the 2020 election.

“I’m worried, but you know, a lot of people worried about this and I think in Arizona, we’ve made some progress,” said he said.

“We’ll go to war here in November with a better set of election integrity laws than we had in November of 2020,” Masters said.

One of the problems is the model of big tech interference practiced by Mark Zuckerberg, the CEO of Facebook, who spent more than $400 million to sway the 2020 election to former vice president Joseph R. Biden Jr.

Zuckerberg also told Joe Rogan on his podcast that Facebook deliberately suppressed news related to the Hunter Biden laptop after the FBI told him it was part of a Russian information offensive.

“Zuckerberg literally just admitted that the FBI coerced Facebook into censoring, true information about Hunter Biden in the weeks before the 2020 election, so when you have the FBI, when you have federal law enforcement working closely with multibillion-dollar corporations to put their thumb on the scale, to decide what Americans get to hear about in the weeks leading up to an election–I think we should all worry about that,” Masters said.

“How could you not be worried about that?” he asked.

This election is critical because of the radical plans the Democrats would execute if they keep control of the House and gain an absolute majority in the Senate, he said.

“If the Democrats take control of the Senate, if they can actually get Biden’s agenda through, they will pack the Supreme Court. They will federalize elections. They will add new states to the union,” Masters said.

“Like the Biden says that anyone who cares about the Constitution, anyone who wants to put America first, he says, that’s fascist,” he said.

“What Biden is doing is this creeping, bureaucratic totalitarianism that they’re ushering in. That’s gonna be the end of America. If we don’t put a stop to it right now,” he said.

Masters said in the Senate, that he would work to reform the federal civil service system, which protects the federal employees, specifically to hold them accountable for job performance and to remove their extraordinary job security.

“I just think that people who work for the government shouldn’t have lifetime tenure. Maybe there should be some performance reviews,” said former investment banker said.

“Maybe you should give the good people, a raise and fire, the bad people. How about that? Instead of just this entrenched bureaucracy where nobody can, can ever be fired for any reason like that doesn’t make any sense at all,” he said.

The Senate candidate said government employees are treated in a way that is completely unknown in the private sector.

“Imagine running a business that way—ludicrous–if you, if you were the CEO and you could never fire an employee, whether they were good or not, you think that company would work,” he said.

Masters said he does not believe the civil service has become feudalism. “I wouldn’t say that. I just think the civil service’s become mind, numbingly, bureaucratic and increasingly left-wing.”

Because the civil servants are immune to accountability, they can outlast a president they oppose, he said.

“Their whole concept is to just wait out a president, right?” he said. “Look at how hard they dug in and resisted President Trump’s agenda. They just wait out Republican administrations because they know they can never be fired. I think that’s a problem.”

The graduate of Sanford Law School said there are a number of senators he looks forward to working with if he is sworn in in January.

“Mike Lee is always a joy to work with and talk to about the Constitution,” he said.

“We have a good bench and I don’t think the Democrats do.”