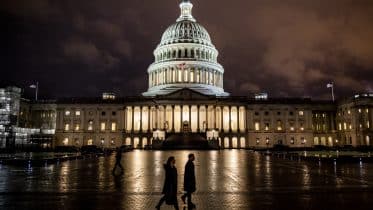 WASHINGTON, DC – DECEMBER 17: People walk along the east front plaza of the US Capitol as night falls on December 17, 2019 in Washington, DC. (Photo by Samuel Corum/Getty Images)

The State of Delaware’s primary election is shaping up to be largely a one-on-one race for its only House of Representatives seat. As the vote approaches, both the Democrat and Republican primaries for the State’s House seat have been cancelled due to only one candidate being put forth by each party.

Democrat incumbent Lisa Blunt Rochester (D-Del.) was officially announced as the uncontested winner of her party’s primary once the deadline to file for a spot on the ballot passed on September 1. Rochester was first elected in 2016. During her time in office she has not been unseated. She continues to run following the larger Democrat party’s ideals.

“These are things that are real and are affecting people every single day,” Rochester said. “And what we’re saying is we are not going to sit back and wait for something to miraculously happen to solve our issues.”

For the GOP, the party has pushed Lee Murphy forward as their candidate in the race by giving him their full support. Murphy also ran in the 2020 election with the support and endorsement of his party. His platform and message have stayed largely the same since then.

This will be the second time that Rochester and Murphy will face off in an election. Both of them ran for the seat last cycle. In the meantime, the State’s ballots are filled with State and local primaries. Races for the 41 State House seats and 21 State Senate seats are being voted on in the upcoming election.