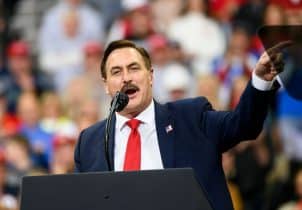 Mike Lindell, CEO of My Pillow, speaks during a campaign rally held by U.S. President Donald Trump at the Target Center on October 10, 2019 in Minneapolis, Minnesota. Lindell is an outspoken supporter of the Trump presidency and his campaign for reelection. (Photo by Stephen Maturen/Getty Images)

MyPillow CEO Mike Lindell claims he was surrounded by the FBI. During his show on Tuesday, he broke the news to his audience that the government agency surrounded him at a Hardees restaurant and seized his cell phone.

Lindell later showed what appears to be a subpoena for his phone then said the FBI also told him to keep “hush” on the matter while the investigation is ongoing.

Since the news broke, President Donald Trump took to Truth Social to alert his followers that Americans are “officially living in a weaponized police state, rigged elections and all.”

The FBI has since confirmed it executed a search warrant, which was authorized by a federal judge.