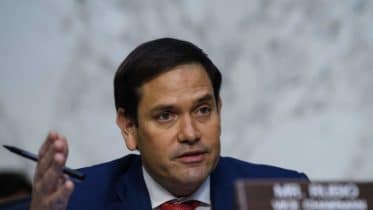 US Republican Senator from Florida Marco Rubio speaks during a hearing of the Senate Intelligence Select Committee on the threats to national security from China on Capitol Hill in Washington, DC, on August 4, 2021. (Photo by NICHOLAS KAMM/AFP via Getty Images)

Sen. Marco Rubio (R-Fla.) says reports of “leaks” from the DOJ and FBI about documents seized from Donald Trump’s Mar-a-Lago home appear to be a deliberate effort to influence US politics.

In an interview Wednesday, Rubio said the DOJ and FBI do not comment on ongoing investigations and they don’t usually leak any information. He stressed, if the probe into Trump were an unbiased investigation then the FBI would have consulted with lawmakers, but it didn’t.

“Why didn’t they come to the Gang of Eight or the Intelligence Committee heads and say, ‘we’ve got this major problem on our hands’?” asked the Florida lawmaker. “Instead, what we get is these constant leaks and the only reason to leak to the media is to influence the narrative. Which tells you this is being politicized, which is doing damage to the FBI, the Justice Department, to important institutions, to our country.”

Rubio also said if the FBI was concerned about any counter-intelligence risks related to Trump, it would notify Congress.